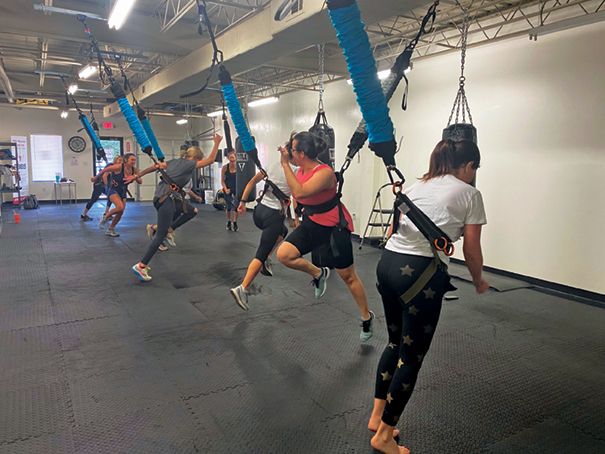 It’s core, cardio, and fun all in one.

After three back surgeries and more than a decade of dealing with constant pain, physical therapy, and decreasing mobility, Christal McNair decided she had enough. She went searching for a way to stay healthy and active that wouldn’t also lead to more strain on her body, particularly her back. In her quest, she found bungee fitness.

“After surfing on Facebook, I saw bungee fitness out of Canada and it appeared to be fun,” McNair wrote in a testimonial on her website. “I worried that I may not be able to do this type of activity with all my back issues, but I decided to see if there was somewhere I could go in Georgia to give this new exercise a try. Unfortunately, I was unable to locate anywhere in Georgia, but was lucky to find the home of ASTRO-DURANCE Total Body Bungee System in Cape Coral, Florida.

“I was able to do push-ups, burpees, and other exercises with no impact on my joints,” she continued. “I was sold immediately and felt energized and confident that [this] system could help others who are similar to me. I saw an opportunity to help not only myself, but others who have muscle issues, arthritis, pain or are rehabilitating for an injury, and that’s when Studio Bungee was formed.”

McNair opened Studio Bungee (studiobungee.com) in July 2018 with a license to use the ASTRO-DURANCE equipment and with a goal to help others who require low-impact exercise, as well as those who just want a unique workout experience. Cobb In Focus spoke with her recently to learn more about her business.

Her original studio was on Whitlock Avenue in Marietta, but McNair has since shifted focus and offers her bungee classes in other gyms around the area, including Gfit in Marietta (Dallas Hwy), Abb’s Muscle & Fitness Gym in Dallas (Village Walk), and new locations in Dalton and Rockmart that should be open in the first quarter of this year. She also partners with physical therapists and chiropractors to help those patients get their bodies back in shape. McNair and her team of fitness instructors offer workout classes daily for beginners and advanced bungee enthusiasts. Additionally, Studio Bungee provides other workouts, including Ab Blaster, Yoga Tone, Suspension Training, and ZUMBA. Her goal, McNair says, is just to keep people moving.

“It’s not choreographed,” she said. “I really let the fitness instructors look at what they need to do for that class group. It’s something different every time they come in, and it goes by pretty fast. So, we try to keep it fun, too, and we’re not always flying. …But that’s part of it. That’s the fun of it. People get to fly around a little bit, but it is a serious workout.”

McNair added, “It’s a really cool concept that I’m in love with, obviously, but not just because it’s my business, but it helps everybody get stronger.”

What is bungee fitness?
Bungee fitness was developed in Thailand and spread quickly around the globe as people learned that this low-impact workout involves cardio, strength training, and core fitness while minimizing impact on joints. Being attached to a bungee cord that is anchored to the ceiling takes weight and pressure off knees and ankles when incorporating moves such as lunges, squats, or jumping. Plus, once you get the hang of it, you’ll find that your 30-minute bungee class just flies by (pun intended). Are workouts supposed to be this fun? “When you’re on the bungee, you’re holding yourself in a position most of the time — I call it a standing plank position — where you’re leaned out a little bit,” McNair said. “You’re engaging your core the entire time, and your glutes, to get a really strong workout, but also working every part of the body.”

“The whole concept takes the weight off the joints so that you can do exercise without pounding and damaging your knees or your ankles, or your back,” McNair continued. “So, we can make it easier, or we can make it harder by changing the [bungee] cord resistance.”

The bungee cord itself provides all the resistance you need, whatever your level of fitness. According to Studio Bungee, the system it uses is designed for any weight class and includes a harness that fits securely, yet comfortably to provide weightless training that helps to increase muscle tone, strengthen core muscles, and improve flexibility and balance. A 30-minute workout revs trainees to high cardio within 20 seconds, burns up to 1,200 calories, and leaves metabolism burning for 24 hours. And one need not be concerned with the comfort of the harness system, because Studio Bungee’s setup is much easier on the user than systems found in other gyms.

“So, it’s not like you come in and it’s a one size fits all. We have luxury harnesses,” McNair said. “And that’s important because bungee is becoming more popular. But some setups have straps — like rock climbing straps. That’s what the harness looks like; it’s a rock-climbing harness. With ours, the ASTRO-DURANCE, it has much more padding. So, when it wraps around the leg or it wraps around the waist, it doesn’t dig as bad as some other harnesses.”

Additionally, McNair said first-timers need not worry about falling; the bungee system will never let you hit the floor. The worst thing that could happen, she said, is that you end up sitting in the harness, perched above the floor and twisting around slowly until you regain your balance. “You’re not going to hit the floor,” she said. “[The bungee system] just gives them enough support that they can do exercises and feel confident that they’re not going to fall down.” 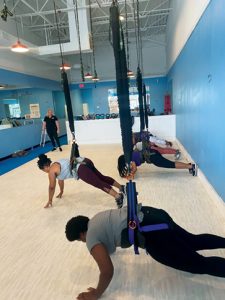 Studio Bungee classes are currently available in Marietta at Gfit (2650 Dallas Hwy, Suite 220) and in Dallas at Abb’s Muscle & Fitness Gym (105 Village Walk, Suite 185). Class sizes typically are fewer than 10 people, so there’s plenty of room for participants to jump and bounce around without the fear of knocking into each other. Booking is as easy as visiting studiobungee.com and following the prompts under the “Find A Class” menu item. First-time trainees should schedule an introductory class, which is just $15. Additionally, McNair offers several beginner packages to save guests money on future classes. There are group event packages as well, for those who want to schedule a class with friends and family for a birthday or other special occasion.

“We keep all the classes small so that we can coach to each person in the class and make sure they get a full-body workout,” McNair said.