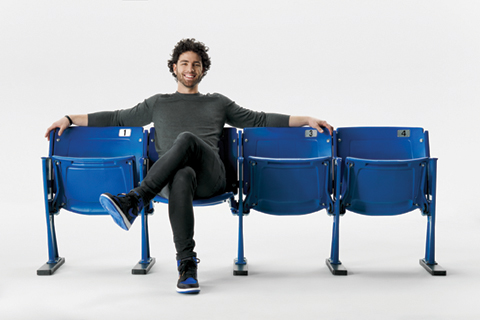 LGE & Dansby Swanson share an affinity for helping others.

On Nov. 2, 2021, The Atlanta Braves won Major League Baseball’s World Series for just the fourth time in the franchise’s history. And it’s the first championship trophy the team has brought to Truist Park in Cobb County, which the Braves have called home since 2017. While the final financial windfall for the county still is being tallied, there are some numbers that we do know.

According to the nonprofit news service Capitol Beat, Cobb County took in at least $5 million each night that Truist Park hosted the World Series. The news service also reported that while the Cobb Chamber of Commerce didn’t have a predicted economic impact from the games, the Chamber said all the hotels in the Cumberland Community Improvement District (CID) were sold out for World Series. Additionally, a 2018 Georgia Tech economic impact study showed the Braves bring more than $18 million into the immediate area around Truist Park, an area that does not include the CID. So, one can easily imagine that the championship gave that number quite a bump.

Of course, the team itself benefited — and will continue to benefit — from winning the championship through a share of ticket sales, merchandise, player bonuses, et cetera. Among those players, a few stood out during the sixth and final game of the Series. One of those men was Braves shortstop Dansby Swanson, who hit a homerun in Atlanta’s 7-0 victory in Houston. Swanson was born in Kennesaw and attended Marietta High School before playing college baseball for Vanderbilt University where his team won the College World Series in 2014 — and he was named Most Outstanding Player.

Indeed, Swanson is an outstanding player on a team full of outstanding players and coaches. This fact alone makes him an attractive partner for corporations, but his local ties mean even more to Marietta-based LGE Community Credit Union, which signed him to a multi-year endorsement deal early last year. For his part, Swanson already was quite familiar with LGE; he has been a member since 2012. “Although Dansby’s been part of the LGE family for many years, we’re excited to further that relationship in an official spokesperson capacity,” said LGE President and CEO, Chris Leggett.

The credit union found Swanson to be the perfect fit as a spokesperson not only because of his success, but because of his strong alignment with LGE’s historical roots and community values. Swanson grew up in Marietta, roughly three miles from LGE’s first headquarters and four miles away from the credit union’s first branch, which was located in the B-1 building basement of the Lockheed-Georgia Company plant.

Community ties
In announcing the endorsement deal last year, Swanson said, “I’ve been a member since 2012, but I can remember LGE being a part of my life ever since I was little. Both of my grandfathers actually worked at Lockheed and then my mom did as well for a few years. It is cool to see that family history come full circle with my new endorsement relationship with LGE and be a part of something my grandparents were also involved in. It is a great feeling to work with a brand that not only has ties to my family, but is one I’ve known my whole life and genuinely believe in.”

To be certain, this isn’t just a monetary relationship. Both Swanson and LGE are passionate about impacting their community in a positive way. In fact, LGE is a not-for-profit, member-owned financial institution. Swanson said, “One reason I’m excited to be working with LGE is because they really care about the metro Atlanta community and are serious about giving back. I think it’s important to be serious about helping others and really making a difference because you never know what kind of impact that will have on someone’s life.”

Among LGE’s community commitments is a decades-long program of assisting local children, homeless, abuse victims, and those that fall on hard times. Not only is there a monetary contribution, the credit union says, but LGE staff members volunteer more than 2,600 hours in the community annually. Additionally, the company partners with schools through its Partners in Education platform. Continued efforts show why LGE Community Credit Union remains to be a fabric of the community.

Annually, the LGE Foundation leads a fundraising campaign with the goal of helping give back to the communities it serves. Proceeds raised from local events, as well as personal contributions given throughout the year, are matched by LGE and donated to local non-profit organizations (including SafePath, MUST Ministries and Calvary Childrens Home), families, or individuals in need. Since 2010, the LGE Foundation has given more than $1.45 million to local organizations.

Swanson is co-founder of All Things Loyal, an apparel company that celebrates Atlanta culture and gives back to the community. Additionally, he is involved with Good Sports Inc., which supports America’s youth through sports, as well as the Cheatcode Foundation, which is leading a movement to empower communities to seek transformational healing and influence social change by providing access to effective mental health services to the most at-risk and underserved communities. 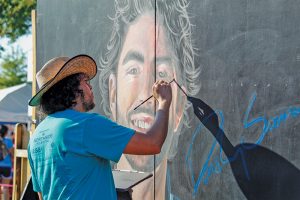 This past fall, LGE honored Swanson with a mural displayed in Marietta Square. The mural features a portrait of Swanson in a Marietta High School letterman jacket, paying homage to LGE and Swanson’s shared Marietta roots.

The credit union commissioned the portrait through its sponsorship of Chalktoberfest — a widely-attended event hosted annually by the Marietta Cobb Museum of Art. Artist Ivann Garc painted the portrait live over the two-day event on October 9 & 10, 2021. The portrait is one of four being displayed at the Marietta square for the next year.

When asked about the painting, Swanson said, “The artist did a great job. I’m just so proud to be from Marietta and to have grown up here, and I’m honored that LGE chose to recognize my hometown roots in this way.”

“LGE had been headquartered at 430 Commerce Park [in Marietta] since 1981,” Leggett told this publication last year. “Back then, we had fewer than 40,000 members and fewer than 100 employees.”

There were a few reasons LGE leadership decided to relocate, but one of the top motives was that Cobb County expressed an interest in purchasing their old building. “We believed it presented an opportunity for LGE to secure a location that would better meet our future needs,” Leggett said.

Carol Wagner, SVP and chief administrative officer with LGE, said the new location occupies the entire 16th and 17th floors, in addition to part of the 15th floor, of Cumberland Center II. The space houses staff that support all facets of LGE operations. “We completely renovated the space prior to move-in to feature natural light viewable from all workstations, standing desk options for all workstations, and different options for working throughout the space, including nooks, hubs, and booths,” shared Wagner.

About Dansby Swanson
Aggressive at the plate and a dynamic shortstop for the Atlanta Braves, Dansby Swanson has completely transformed the Atlanta Braves’ defense with his incredible speed, fielding ability, and unparalleled arm strength. In 2020, Swanson led the league in defensive runs saved and was a finalist for the NL Gold Glove Award. His work in the field is only matched by his tenacity at the plate and his ability to perform in clutch situations in the post-season. Selected with the first overall pick of the 2015 MLB Draft, Swanson has ascended from a top prospect to a linchpin within the Braves’ lineup. Prior to his rise in the majors, Swanson led Vanderbilt to a College World Series victory in 2014 where he easily won the Most Outstanding Player award. Born and raised in Cobb County, Swanson pays homage to his hometown through his #AllThingsLoyal campaign, where he highlights the city’s local artists, themes, restaurants and milestones. Thoughtful, hard-working and approachable, Swanson has emerged as a leader in the clubhouse, ready to bring the Braves into a new era.