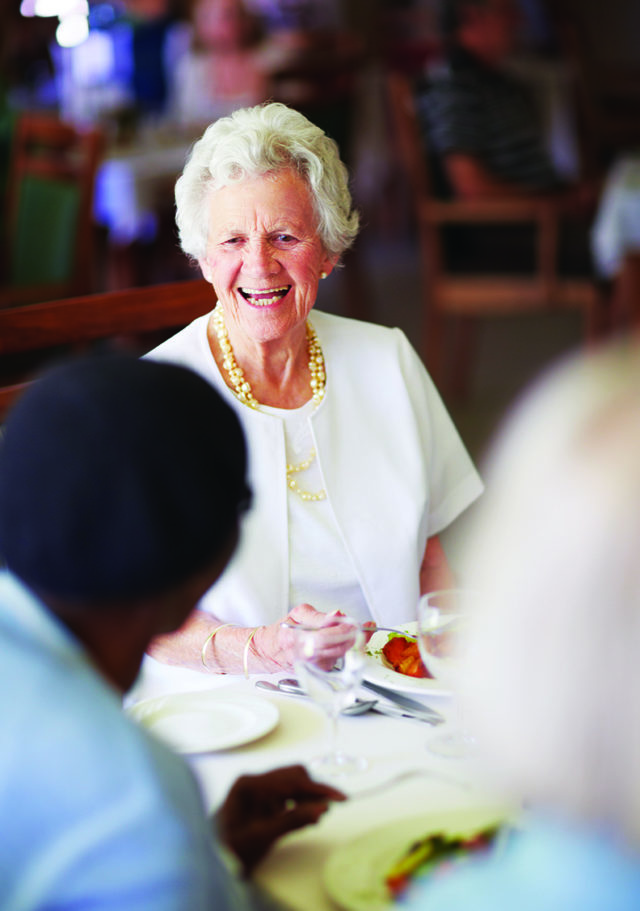 Senior centers have been hard hit in the coronavirus era. But there’s good news just around the corner.

The last several months have been unbelievably difficult for just about everyone in Cobb County, the United States, and the world. Still, no community has faced a tougher situation than seniors, particularly those in senior living communities.

Already at risk of isolation and chronic disease, residents of senior living communities from coast to coast have found themselves in hot spots for COVID-19 since mid-March. But there’s so much more to senior living, with many recoveries and many great things taking place, almost always outside the spotlight, each and every day of the year.

“It has absolutely been a difficult time for our residents, especially when they haven’t been able to see their families. To a large extent, they have been socially isolated since mid-March,” says Deke Cateau, CEO at A.G. Rhodes, which operates two facilities in Atlanta and one in Marietta. “We’ve found that our residents have been great. They’ve been troopers. They know what’s going on in society, they understand the steps we are taking for their protection. While it’s sad, a lot of them understand the reality.”

Cobb County’s senior living facilities have scrambled to adjust to the coronavirus and its accompanying restrictions on human contact, yet maintain a healthy environment for the vast majority of residents, keeping them in touch with friends and family via electronic means and continuing to provide a range of activities either virtually or at distance.

“We’ve made a lot of adjustments, and one of the biggest has been through Skype calls, FaceTime calls, and using electronic devices to assist,” says Cateau. “That way, residents are able to see their loved ones and family members. In the homes themselves, we’ve been able to move some programming online while ensuring social distancing.”

Staff members also have stepped up in a major way to continue caring for residents, even while finding themselves at some risk of contracting the disease. At A.G. Rhodes’ Marietta facility, activities director Sonya Williams oversees events designed to empower the seniors living there with a well-rounded quality of life. “We’re focused on simple pleasures and the wants and needs of the elders,” she says. “We also focus on resolving some of the bigger issues in homes like this, such as loneliness, helplessness, and boredom.”

One resident who seems to easily avoid all three of the aforementioned issues is Merle Houston, a former college librarian and three-year resident at A.G. Rhodes in Marietta. Houston not only attends activities, either virtually or in person, she encourages her fellow seniors to do so as well.

“My family thinks I’m sitting here holding my hands. Believe me, we stay busy,” she says. “I thought that everybody would be wanting to jump up and down and do something, but that’s not the case. Sonya has to provide for a lot of different personalities. Those who want to do things will do it, and those who don’t will tell you they do not want to do it!””

A personal favorite for Houston is A.G. Rhodes’ Music Therapist, John Abel, who sings for residents while playing a guitar. He takes requests and it’s hard to find a song he can’t play. Lately, Abel even does so while sporting an N95 mask, which again displays his talents but also serves as a grim reminder of the times.

While many seniors around the nation have succumbed to the coronavirus, many more have recovered than passed away. Cateau says some of the most joyful calls are those made to family members when a resident recovers, especially when they begin testing negative for the disease.

Aside from COVID-19, the other big national news of late has been protests against police brutality and in favor of diversity and racial equality. Cateau, who is black and leads a majority black staff, stresses the importance of having this conversation with residents and staff.

“More than half of our residents are African American, and the vast majority of our staff are as well,” says Cateau. “We are trying to be there to support them and allow and encourage conversations around that between staff and residents. We do what we can as an organization to let them know how much we care for them, and how we will do our best to try to move against some of these obvious inequities in society.”

Though it does not house any residents, the Cobb County government needed to make major adjustments to its senior services once coronavirus took hold. Some of its programs shut down. Others, most notably Meals on Wheels, were needed more than ever.

With seniors stuck at home and volunteers, some of whom were seniors themselves, unable to help, county staff were recruited to step up and provide meals across the county. “We shifted many of our staff to operate Meals on Wheels,” says Jatunn Gibson, Cobb County’s director of senior services. “We were not operating our centers. And that’s how we got through [the shutdown], using staff to fill in for volunteers.”

Other adjustments were made in order to reduce contact. For example, recipients got the same amount of food in total, but in larger shipments that came less frequently than before. Transportation was the other area the county focused on. Buses picked up seniors who needed to get to, for example, critical medical appointments. Even this was more difficult than before because they needed to be transported individually. Lastly, much of Cobb County’s programming was offered online for those with internet access. The county is now slowly and cautiously reintroducing volunteers to senior services.

Another entity that provides non-resident senior services is Aloha to Aging, a nonprofit founded 11 years ago by Dawn Reed. Aloha to Aging provides education, wellness, support groups, and an adult day care at Mount Bethel United Methodist Church in East Cobb and at Burnt Hickory Baptist Church in West Cobb.

Aloha to Aging pivoted quickly when COVID-19 hit, offering Zoom programming as early as March 18. Reed says the seniors who have been able to adjust to online programming have done much better than those who haven’t. “Being able to laugh and talk with them, sing and cut up with them, is so important,” says Reed. “One thing we say is, ‘if you haven’t laughed five times in the time we’ve been together, we haven’t done our job.’”

Aloha also aims to help younger people understand the challenges that come with aging. The organization hosts “scenarios” where they may put earplugs in a participant’s ear, or Vaseline on their glasses, and have them try to perform everyday tasks like preparing pills for a vacation. Reed says it helps people relate better and communicate better with their senior friends and loved ones.

“I don’t think we give seniors enough credit,” says Reed. “They’re more resilient than most adults today. They have seen and been through so much, their grandparents or parents went through the Great Depression or World War II. They’re a lot more resilient than we give them credit for.”

At Presbyterian Village, a senior living facility with nearly 300 residents in Austell, one of the biggest changes that took place after March was a vast expansion of the in-house broadcast, known as PVTV. “Monday through Thursday, we have a chaplain and a staff member host the show. I’m on it every Wednesday, answering questions the residents have for us,” says Ken Rhudy, executive director of Presbyterian Village. “We also broadcast different exercise classes on PVTV. That allows our residents to exercise in their homes comfortably and safely.”

Presbyterian Village also makes hundreds of calls a week to residents and family members, keeping them up to date on everything that is going on. As of early June, more than 18,000 phone calls had been made. Starting in July, Presbyterian Village hopes to slowly, and very carefully, begin reintroducing visitors to its Austell homes.

“We are starting our phase one plan for reopening,” says Rhudy. “We’re being extremely careful with this. There are so many factors out here and the virus has not gone away. But we do have a reopening plan, and starting sometime in July we’ll start having limited visits on campus again.”

Are You Fully Prepared For Your Golden Years?