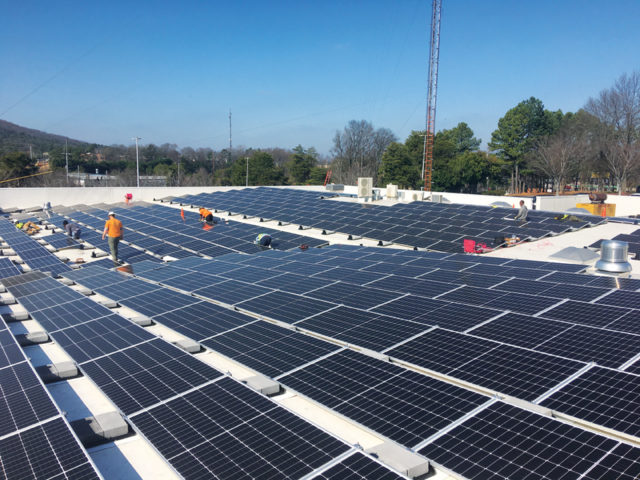 By Cory Sekine-Pettite
Reprinted and updated from May/June 2021

Cobb EMC continues its commitment to its clean energy goals, and it reminds members that by 2030 the electric cooperative will reduce carbon emissions by 75 percent and double up on its renewable energy portfolio with a 200-percent increase. “We are passionate about a greener future while keeping our electric rates low and reliability high,” says Cobb EMC President/CEO Kevan Espy. “Furthermore, we are confident that we can achieve our renewable energy goals without passing any additional costs on to our valuable members.”

So far, Cobb EMC is well on its way to producing cleaner energy, having already installed rooftop solar panels on its campus, completing a Solar Flower Garden and battery storage facility, and installing its utility-scale solar project. Further, this year, Cobb EMC will be among the few cooperatives in the nation that will incorporate microgrid technology. The system will allow the co-op to operate autonomously if the need arises by furnishing a continuous supply of power to the cooperative during any extended outages, which strengthens power grid resilience for faster response and recovery. “The microgrid is an evolving technology that will complement our existing solar and battery system to help create this autonomy,” Manish Murudkar, director of DER (distributed energy resource) Strategy told Cobb In Focus last year. “Our goal is to build a model for future microgrid projects, and increase the quality and resiliency of our power system.”

“Cobb EMC is committed to a sustainable future while maintaining low rates and high reliability,” says Tim Jarrell, VP of Power Supply, Rates & DER Strategy at Cobb EMC. “Cobb EMC has set goals of increasing our renewable energy portfolio by 200 percent, with a 75-percent reduction in our carbon footprint by 2030. We are also in a great position to meet any future state or federal mandates to achieve a clean energy future.”

According to the National Rural Electric Cooperative Association (NRECA), the nation’s electric co-ops, which serve about 42 million people across the country, have nearly tripled their renewable energy capacity over the last 10 years. The group reports that co-ops have deployed enough wind and solar capacity to serve nearly 2.7 million homes, and that they will continue to rely on a diverse energy mix to ensure a reliable, affordable, and responsible electricity supply that meets the needs of their consumer-members.

The best way to a cleaner future is through multiple sources of energy production, Jarrell told this publication last year, adding that while solar has the greatest potential of meeting clean energy goals, wind power can’t be ignored “if taller turbines are considered, which provide more electricity output and better economies of scale. Also, other technologies shouldn’t be ruled out that have potential such as hydrogen renewable energy.”

The co-op’s members understand the need for cleaner energy production, and Jarrell reports they are on board for change. “Some of our members have expressed their desire for utilities to work toward a sustainable future and gratitude for what Cobb EMC has already done towards a clean energy future,” he reported to us last year. “The majority of Cobb EMC members place low rates and reliability as their top priority from their cooperative. Cobb EMC can be a leader in all three of these areas.”

For example, in the co-op’s “Green Energy for a Penny” program, members can choose to help support a clean energy future for just a 1¢ per kWh charge. The program allows members to purchase renewable energy credits from Cobb EMC and support solar farms right here in Georgia. Currently, about 100 members have joined the program. Learn more at cobbemc.com/green.

The organization also has become a local leader when it comes to planning for electric vehicle (EV) infrastructure. Cobb EMC is active in supporting EV adoption. The cooperative provides an EV loaner program for members, it offers EV charging rebates for residential and commercial members, it hosts EV seminars that bring together members and industry experts, and it works with Green Power EMC (a renewable energy program consisting of 38 co-ops throughout Georgia) on larger initiatives while working with other organizations such as the EV Club of the South. Read more about this program and other Cobb EMC sustainability initiatives at cobbemc.com/sustainability.