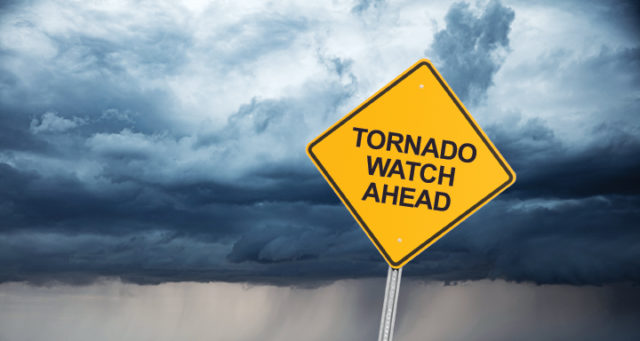 According to a recent report from the AccuWeather Global Weather Center, tornado activity in March surged in the United States. At least 253 preliminary tornado reports were recorded throughout March 2022, the organization states. While the number was preliminary at press time, only 193 of the reports need to be confirmed as actual tornadoes to break the record of 192 confirmed tornadoes in 2017.

For most of March, AccuWeather noted, the contiguous U.S. didn’t go more than three days without a report of a tornado touching down. Violent storms continued into April. In our state, for example, five tornadoes were confirmed in just one day on Wednesday, April 5 resulting in at least one death. Meteorologists and other climate change experts agree that as our climate continues to warm, we will experience more frequent and more ferocious weather. So, now is a good time to remind everyone of a few tornado safety tips, courtesy of AccuWeather:

If you are driving on the road, and see a tornado, do not take shelter under an overpass, and never try to outrun a tornado. If there is no shelter nearby, stay in your car, in your seat belt, and keep your head down below the window. If you can safely get to a low-lying area — such as a ditch or ravine — exit the car, lie down, and cover your head with your hands.

If you are at home, go to a pre-designated shelter area such as a safe room, basement, storm cellar, or the lowest building level. If there is no basement, go to the center of an interior room on the lowest level away from corners, windows, doors and outside walls.

If you live in a mobile home, leave the mobile home immediately because it will provide little to no shelter from a tornado. Instead, go to a community shelter, or get as far away from your mobile home as possible and lie down in a low-lying area.

Those at work or school should proceed to a tornado shelter location quickly. Stay away from windows and do not go to large open rooms, such as cafeterias, gymnasiums, or auditoriums.