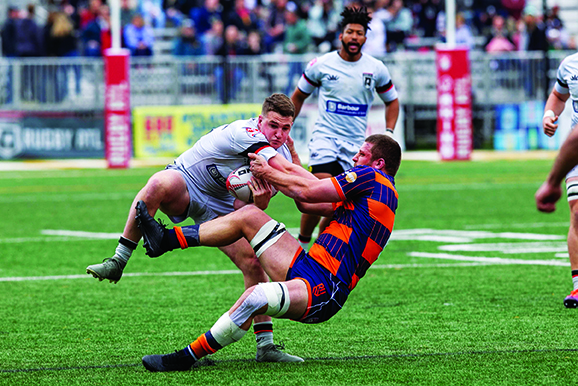 There’s no doubt that metro Atlanta is a major sports destination. With professional teams in baseball, basketball (men’s and women’s), football, soccer and now rugby, there’s no shortage of hometown teams for which we can cheer. Atlanta also is home to the annual SEC college football Championship, and the College Football Hall of Fame. But did you know that Cobb County is a major player in professional sports?

Of course, everyone knows that the Atlanta Braves now are based in Cobb County at Truist Park, and some of you may know that the Atlanta United’s training facility (Children’s Healthcare of Atlanta Training Ground) is in Marietta. But did you know that Cobb also now boasts a professional rugby team? That’s right, Rugby ATL (part of Major League Rugby, or MLR) is headquartered in Marietta and plays their games on a new field adjacent to the Life University campus. The team made its debut in February of 2020, but that inaugural season was cut short because of the pandemic — just a few games into what should have been a celebratory introduction for Atlanta’s sixth major professional sports team.

The team is looking for a reboot, a little redemption, and frankly just a chance to play out their first full season, which is 16 regular-season games just like football. Cobb In Focus recently had the opportunity to speak with General Manager and Head Coach, Scott Lawrence, and player Jason Damm about the shortened 2020 season, Rugby ATL’s second chance at a proper, full season, and what fans can expect at the matches. (Yes, the games are called matches, just like in soccer.)

“As you know, Atlanta is a great sporting market; a diverse city,” said Lawrence, who spent 15 years running the college rugby club at Life University and also was the USA Rugby National Team Defense Coach prior to joining Rugby ATL. “We have … people from everywhere here. You can see in the energy that Atlanta United has generated that there is an appetite for international sports in Atlanta.”

Lawrence spent a year building up his team and getting the program ready for its 2020 debut — just as the pandemic began taking its toll on America. Certainly, this wasn’t the way anyone at Rugby ATL wanted to start the year, but Lawrence and his squad saw the pandemic as an opportunity to give back and stay connected with the community. “Job number one for us was to continue to support these people and businesses in Marietta, in particular in Cobb County, and then do our part in serving those who are struggling,” he said.

Among its community partnerships, the team joined Catered Southern Events and MUST Ministries to feed the homeless. The team collected toys for Children’s Healthcare of Atlanta, and they support youth rugby across the Southeast with their Pathway 404 Foundation. 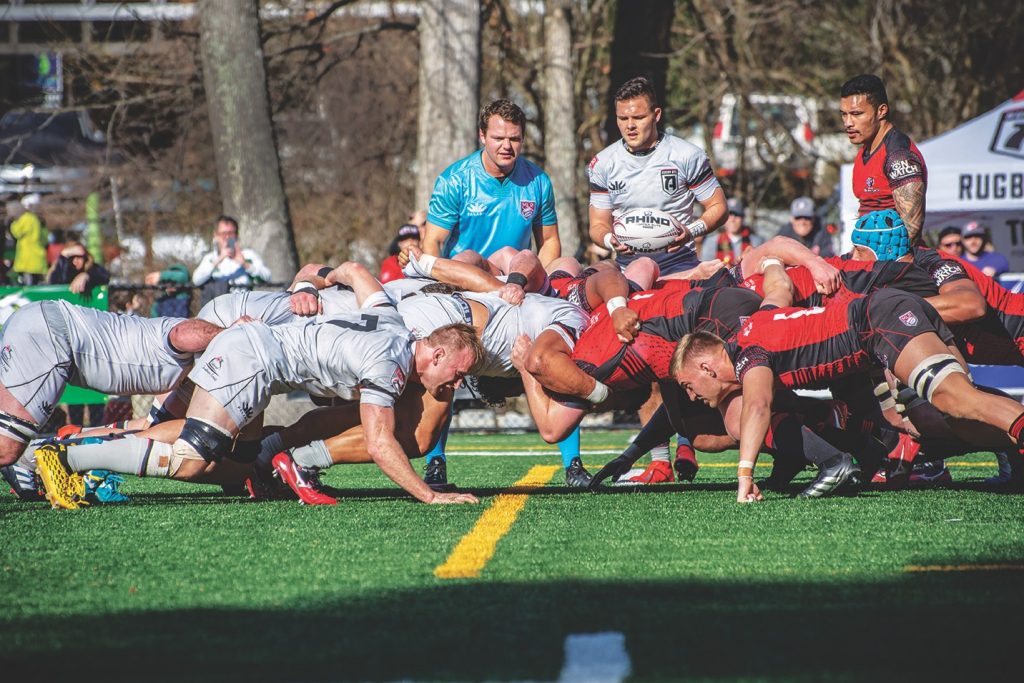 The team also has spent this year training and gearing up for a relaunch of sorts. Lawrence says fans can expect to see an exciting brand of the sport played here in Cobb, with a stimulating environment on their home field — or pitch, as they call it in rugby. “We have recruited some what I would call ‘X-factor’ players this year, which I think was missing when we initially got started,” he said. “So I think from a fan and stadium experience, [we have been] upping that fan experience and making sure that it’s a family environment where you can come, you can have a good time, you can be yourself, you can support the team, and do it in a relaxed atmosphere that’s affordable for families.”

Speaking of the fan experience, if you’re new to rugby, Lawrence says what you can expect to see is a physical game like football — but with no pads — mixed with elements of soccer. “If you would imagine a football team that ran 12 plays in a row with about three seconds’ break in between each play, that is what rugby is like. So a lot of action,” he said.

The Rugby ATL team features many international players — including a large contingent of players from South Africa, but there are local players as well, such as Damm, who was born in Marietta. Like many Southern boys, Damm grew up playing football. He didn’t discover rugby until he went to Clemson University and was asked to join the school’s intramural club. “They opened so many doors for me, so I’ll be very grateful to them forever,” he said.

Playing professional rugby was in the back of Damm’s mind as he graduated with a biological sciences degree and began teaching at a nearby high school. Eventually, he was able to try out for the MLR’s Glendale Raptors near Denver and made the team. One season later, he moved to Atlanta to be closer to his fiancé, who lives in Charleston. “Luckily enough, the [Rugby ATL] crew were happy to have me, so I made the move back down to my roots,” Damm said. “I love this team. I love how dedicated we are to trying to build up rugby in the Southeast.”

Much of that excitement will come from the way the team handles itself on the pitch. Damm said they have an aggressive strategy this year, so fans will have a lot to enjoy. “You don’t have to understand the game to enjoy it, but you can get the basics of it. If you’re going to run with the ball, someone’s going to try and tackle you. If you can understand that concept, you can enjoy a rugby game.”

Many local fans already are enjoying the games, so Rugby ATL wants to build on that energy for this season. “The Atlanta area and the town of Marietta have been super-accepting of us as a team and as a culture,” Damm said. “So I’m just excited to get back together as a whole team and start building on for next year. And I think we’re going to have a great squad. We’ve got some new guys coming in that I’m excited to play with, and obviously a lot of the same guys from last year who have really built a bond together. …And, you know, we didn’t really have a chance to stamp our name on the game last year. I think we’re just hungry for that recognition and that opportunity.”

To learn more about the team, and to purchase tickets for the upcoming season, visit https://rugbyatl.rugby.