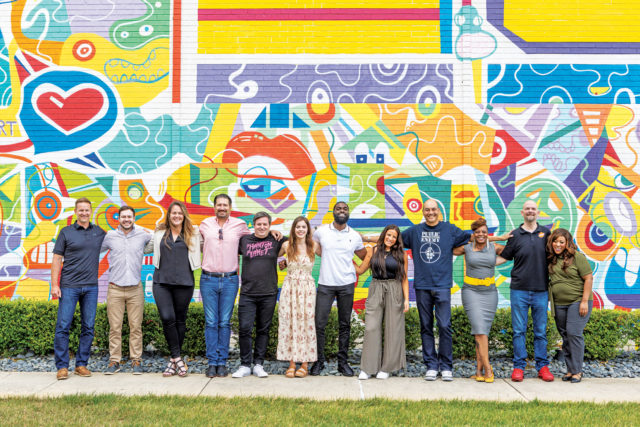 How one of Cobb Chamber’s 2022 Top 25 Small Businesses of the Year winners succeeds by doing things differently.

While listening to a certain song, you may have thought to yourself, “If my life had a theme song, this would be it.” Or, “This song is my workout anthem.” However, you probably haven’t considered, what’s the one song that personifies the soul of a project I’m undertaking at work? But that’s exactly what Arnold Huffman and the “tribe” he leads at his marketing and branding company, Yalo, want you to do.

The “Soul Song” is, as Huffman explains, the company’s signature part of an industry mainstay — the creative brief, which includes the goals and desires a client has for the final product, be that a digital marketing campaign, new website, brand overhaul, or something else. “We build a playlist in Spotify, and we debate the songs on that playlist with the client,” he says, explaining that after the client listens to the playlist, “Then, they come back, and we discuss and narrow that playlist down to one specific song to be the driving force going forward for what we do creatively. So, it’s the attitudinal and emotional centerpiece for what we’re trying to deliver.”

Doing Things Differently
Music is but one of the unique elements the agency incorporates into its work. Art, sports, and film also are brought into play — the goal being not only to use them as inspiration and a form of interpretation, but also as tools to bring down walls surrounding conversations and ideas, both with clients and the audiences they’re trying to reach in order for those conversations and ideas to feel approachable and relatable, says Huffman.

The company’s use of a football field analogy is another prime example of this approach. Huffman says, “Most marketing people talk about the customer journey as a funnel. However, here at Yalo, we look at the customer journey on a football field. On the left side of the field are the prospects that don’t know your brand. The goal is to move prospects across the field, left to right, by applying a series of marketing tactics and content — a series of ‘plays.’ This exercise helps our clients really visually understand what they need to do to be successful with their marketing.”

Recently, Yalo was named one of the Top 5 Small Businesses of the Year among the Cobb Chamber’s 2022 Top 25 Small Businesses of the Year, and Huffman understands the importance of differentiation in a saturated market. “There’s no shortage of small agencies like us,” he says. “I heard a stat somewhere in the last 18 months or so that Atlanta alone has 300 marketing agencies. And that’s a stat based on you having to be two or more people. You can’t just be an independent contractor.”

And differentiation can be found in nearly all aspects of the company, which Huffman started in 2013. Its name comes from the language of a country he fell in love with many years ago after taking a vacation there with his wife. Meaning “soul” in Fijian, Yalo expresses what is at the core of the company and its work, says Huffman.

He has also been as dedicated to doing things differently with his team as he has been with clients and how the company presents itself publicly (think textured and eye-catching business cards in the shape of the logo and featuring an icon personally selected by the team member carrying it to represent themself).

Roughly five years ago, when Huffman’s tribe was just 10 employees — compared with the team of 40 he has now — he had the foresight to hire three employees crucial to the company’s current growth. He needed someone to manage the more administrative side of operations, he needed a salesperson, and a senior business development person. Huffman says, “I think it was pretty unique for a small agency like us, rather than me doing it all. Because there’s a finite capacity of people I know and how many I can talk to at any given time and deals I can work on. So, we made that investment to expand the acreage of the farm, if you will, with more farmers to find more opportunities.”

In 2020, the company continued to differentiate itself from the inside out and launched a Concert Benefits program, which reimburses employees for the cost of tickets to attend concerts in their free time. “Having our team members out actively engaging in these shows and these experiences makes us stronger together because we all share the same love of music, albeit very different types of music,” says Huffman. “One week we have people at a [Justin] Bieber show and the next week we have someone at a punk rock show and the next, a blues show. So, it’s just another piece of our diversity as well.”

One of his most beloved records is a rare Prince album that was never meant to be released widely. It turned out not to be a live recording from a night club like Huffman thought, but an album — “Piano and a Microphone” — that wouldn’t be released until 2018. “It’s printed on purple vinyl, which was pretty unique at the time. It also has a typed sheet of paper with the track list glued to the front, which notes that only 1,000 were printed,” he says. “It includes an eclectic mix of early versions of great songs like ‘17 Days,’ ‘Purple Rain,’ ‘Mary Don’t You Weep,’ and ‘Strange Relationship.’”

Another aspect of the company driven by Huffman’s personal connection to it is a focus on diversity. Yalo is 100-percent owned by Huffman, who is Korean American. “My dad was in the Army and got sent to Seoul, South Korea. That’s where he met my mom. I’m 50-percent Korean and 50-percent German,” he explains. Hence, Yalo is also 100-percent minority owned. As part of his dedication to promoting diversity, Huffman had the company commit to The A Pledge, a mission among Atlanta-area marketing and advertising agencies to actively pursue diverse hires and work to, by 2030, have staff that is representative of the population of Atlanta.

Having grown up in a small town in Ohio, Huffman says he knows what it feels like to be on the outside. He explains that he and his younger brother were the only Asian children in their elementary school when their family relocated to the area. “It was definitely challenging growing up dealing with that and persevering through name-calling and that sort of stuff, which carried on, shockingly, even into college,” he says. A longtime basketball player along with his brother, Huffman says it was later the Black community that embraced them, a connection forged through the shared reality of often being neither welcome nor understood by the majority around them.

Experiencing more diversity and acceptance also helped Huffman embrace his identity as an Asian basketball player. “My brother and I were very much accepted by the Black culture,” the former Case Western Reserve University basketball player says. “…And so, I always had an affinity for Black culture and Black people. So, that all feeds into my expectation for my organization that we’re going to be as accepting of diverse people as they were for me when I was younger.” Currently, Yalo’s tribe makeup is 22 percent minority and 38 percent female.

The company’s continually growing group of talent certainly seems to be getting things right. 2022 marks the fourth year Yalo has been honored among the Cobb Chamber’s Top 25 Small Businesses of the Year (SBOY). Though Yalo isn’t based in the county — Huffman decided to join the Chamber after connecting with Wayne Dodd and other members — the company is highly involved in the Chamber and supporting the community. “We’re Chairmans’ Circle members. We’re sponsoring the golf tournament coming up. We’ve sponsored that for a few years now. We’ve sponsored the SBOY awards for the last two years, so we’re pretty involved, pretty engaged with the Chamber and proud to do so,” Huffman says.

Yalo also has garnered Digital Marketing Agency of the Year awards from the Technology Association of Georgia (TAG) over the years. Additionally, it won Best in Category for Experimental/New Technology from the Horizon Interactive Awards in 2021 for unique concepts it created for clients earlier in the pandemic.

In terms of what’s next for the company, it’s in the process of putting the finishing touches on its first-ever office space, which it moved into in September 2021. The company has employees throughout the country, but Atlanta and Cleveland, Ohio, serve as central locations. “We decided having a home base for our younger team members and for our leadership to collaborate, especially as we continue to grow, was the right decision. Even though most companies were moving the other direction, we zigged when others zagged and created a new environment for our people,” Huffman says. As part of efforts to make the space as inviting as possible, a new name other than “the office” is currently in the works as well.

Additionally, the Yalo logo will soon have a new look as the company works to freshen up its own branding. But Huffman notes that though the look may change, Yalo’s pursuit to “bring soul to your brand and expand and elevate your brand by finding its soul” remains the same.

MUST Ministries Celebrates 50 Years of Service

Motivated Toward A Mission 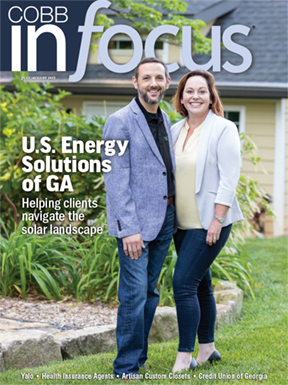