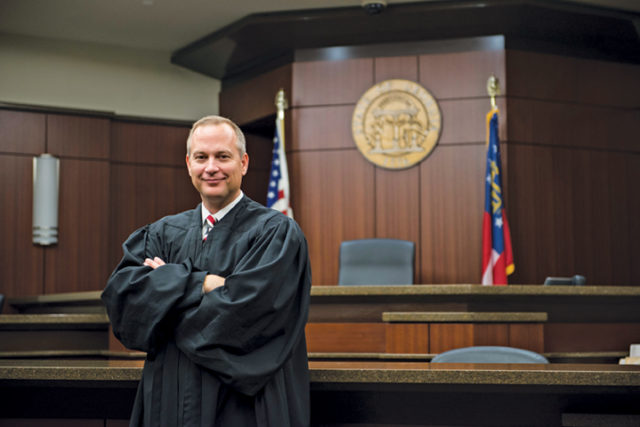 THE STORY: I was born in Lexington, Kentucky to a working-class family. My parents divorced when I was young enough that I do not have any memories of them together. They both remarried, and I was lucky to have four parents who loved me and shaped me into who I am today. After graduating high school, I earned both my degrees from the University of Kentucky. My father instilled in me the principles of entrepreneurship and finding a career doing something I love. After graduating law school, I did just that. I moved to Georgia where I did not know anyone, studied for the bar exam, bought a house, and started my law office all while working an evening job at Staples. The Cobb County legal community welcomed me and with a lot of help and hard work, my firm was successful. I enjoyed my 10 years of being a small business owner immensely.

Following my 10th anniversary to the practice of law, I was encouraged to apply for a judicial vacancy in the State Court. I was honored to be placed on the “short list” of highly qualified candidates by the Judicial Nominating Commission and eventually was selected by Gov. Perdue for that appointment to the State Court of Cobb County. I was subsequently elected by the voters to retain that seat without opposition. Two years later, a Superior Court vacancy came open and I was again nominated, short-listed, and subsequently appointed by Gov. Deal to fill that vacancy. I have since been elected two more times, both without opposition.

WHY I CHOSE TO LIVE IN COBB: I made several trips to Georgia in my third year of law school to meet with lawyers all over the metro area. I chose Cobb based on the overwhelmingly positive feedback I received from the legal community. Cobb’s justice system was (and remains) the best in Georgia.

WHAT DO YOU LOVE MOST ABOUT YOUR JOB? I love that my job challenges me daily to be versed in so many different areas of the law. There are no “small” cases, and the gravity of those decisions needs to be trusted to someone with a wealth of Georgia legal experience. It is a real honor to be that person.

I also love that as the Chief Judge, I have been able to leave my mark on the court through modernizing the courts with technological advances and leading the justice system through some difficult times during COVID.

LEISURE TIME: Spending time with my wife and three amazing children. I enjoy watching Braves games, but I love watching my daughter play volleyball and my son play lacrosse even more. I also give my free time to non-profits, having recently concluded a 14-year tenure on the Board of Directors for the Tommy Nobis Center, where I served as chairman.

WHAT SHOULD READERS KNOW? Local elections are the most important elections in your community. You should know who is running and why, not just what they say about themselves. Voters should also know that with the retirement of two judges effective May 1, 2022, the Cobb County Superior Court has lost over 130 combined years of judicial experience in approximately two years, making me the most senior Judge in Superior Court. At a time like this, experience matters.