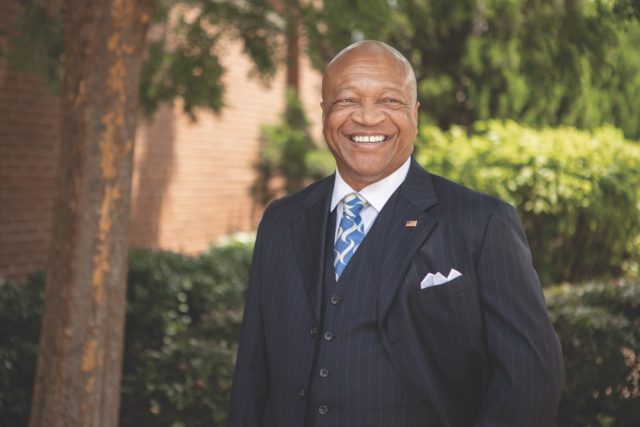 Candidate for Sheriff of Cobb County

THE STORY: I grew up on the border of Cobb County and the city of Atlanta to a military family. My parents instilled in me a passion for service to others and the importance of having a strong moral compass.

After high school, I enlisted in the U.S. Army. Four years later, I transitioned to the Army Reserves and became a full-time Cobb County police officer.

While working to support our growing family, I went on to earn a bachelor’s degree in criminal justice and a master’s of public administration. I also received military training, including from the FBI and the Joint Forces Staff College at our nation’s capital.

Earlier this year, I retired as a command sergeant major, the highest rank possible for an enlisted soldier, after more than 30 years in the Army Reserves.

I am a proud husband, happily married to my high school sweetheart; a father, and grandfather.

WHY I CHOSE TO LIVE IN COBB: Except for the time I spent abroad serving in the Reserves, I’ve spent my entire adult life in Cobb County. It’s where my wife, Sharon, and I raised our children. It’s where I work, worship, and have found community. Living and working in Cobb County has been an absolute privilege and blessing for my family and me.

WHAT DO YOU LOVE MOST ABOUT YOUR JOB? Each day is different. When I put on my police uniform, I ask myself how will I protect and serve the public today? As the commander of the largest, busiest police precinct in the county, I am dedicated to being an example of thoughtful, community-oriented policing. I started as a beat cop, walking the streets and getting to know the folks who call Cobb home. Along the way, I’ve seen our county and its people grow and thrive together. I’ve worked with community leaders, come to the rescue of those in need, mentored the next generation, and have protected the public from bad actors. It’s tough, fulfilling work.

LEISURE TIME: I’ve always found it hard to sit still, but when I do get a break, I spend time with my family at home or with the guys on the golf course. Of course, there’s always time to cheer on the Atlanta Falcons.

BEST ADVICE: I have two pieces of advice that I live by: The easy way out always costs more in the end, and integrity matters. My work impacts others. That’s why I am so passionate about leading with integrity, especially when it hurts. The race is not given to the swift or the strong but to those who endure to the end.

WHAT’S NEXT? I am a first-time candidate running to be sheriff of Cobb County. This election is an important opportunity to restore truth, trust, and transparency in the sheriff’s office and to ensure good stewardship of the public’s dollars.