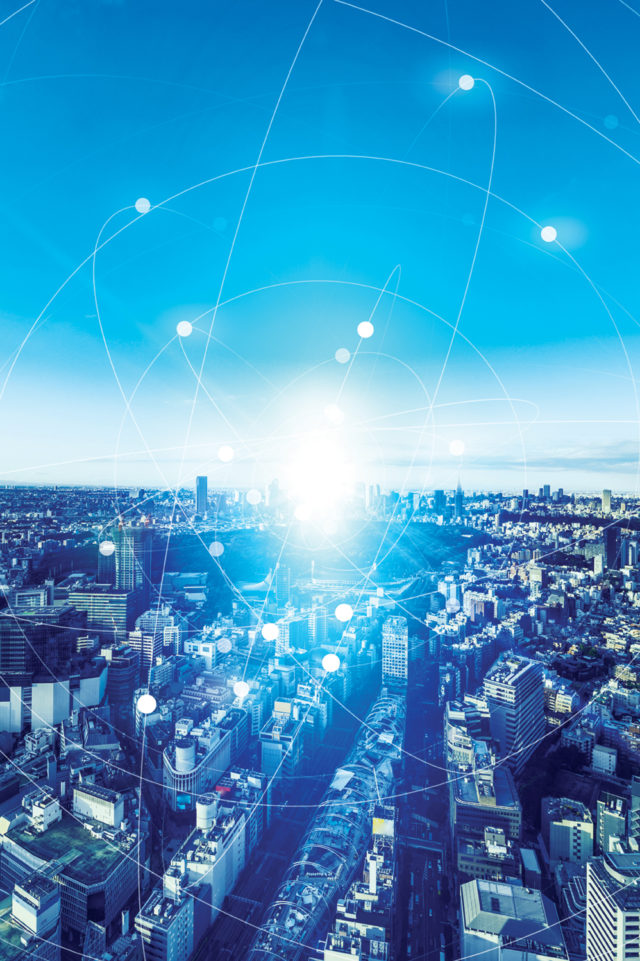 How Comcast Business is enabling customers, corporations, and cities to be smarter and more efficient.

Comcast provides communications services to businesses and consumers across the country, including Cobb County.

In recent years, the company has been expanding those offerings to the so-called Internet of Things (IoT) through a service called MachineQ. MachineQ is a device-to-cloud platform providing the end-user immediate access to the enterprise-grade wireless infrastructure they need to securely collect, transmit, and receive their data. Additionally, the company has quadrupled its fiber-optic network over the last four years to provide closer-to-the-customer access. Businesses and government entities are taking advantage of this technology through initiatives like Comcast’s Smart City projects, which focuses on resolving issues such as water run-off, leak detection, trash receptacle overflow, and parking constraints.

Battery Based
At the company’s Central Division Headquarters, more than 1,000 Comcast employees work in Cobb County inside an office overlooking right field at Truist Park, the home of the Atlanta Braves. Comcast is more than just a sponsor of the Braves stadium. The company provides an all-fiber network with multi-terabit capabilities to Truist Park and the surrounding mixed-use development, The Battery.

The partnership between the Braves and Comcast created one of the most technologically advanced mixed-use developments in the entire United States. As part of the arrangement, Comcast provides video, voice, and reliable high-speed internet throughout the 60-acre development, even when it’s filled with 41,000 baseball fans all using their smartphones.

“From the outset, we said the Braves would set a new standard of excellence in every aspect of this project, and building the most technologically advanced ballpark in history and redefining fan connectivity is key to accomplishing that,” Braves Chairman Terry McGuirk said when the partnership was announced. “Our partnership with Comcast will keep us head-and-shoulders above other sports venues and mixed-use communities around the country and allow us to meet our fans’ high expectations for engagement, awareness, and access. Shoppers, hotel guests, and office tenants will also enjoy an experience unlike any other community.”

Comcast’s network at The Battery includes two data centers, with 10,000 fiber connections each, all backed by dual 400 Megawatt generators. “This is a truly unprecedented project and I can’t think of a better partner than the Braves, led by the visionary Terry McGuirk, as we bring record Internet speeds and coverage to fans, residents, and businesses,” said Comcast Chairman and CEO Brian L. Roberts. “We’re also excited to make the community around the park home to 1,000 of our employees as we continue to grow our technology team and develop innovative new products.”

When the partnership was announced in 2015, then-Georgia Gov. Nathan Deal praised the arrangement, saying, “I’m particularly excited by Comcast’s plans to create hundreds of jobs and to invest in a new center for technology collaboration. Georgia benefits when imaginative new technology and economic development initiatives like this come to our state.”

Smart Cities
Today, Comcast is again stepping up its game, offering a host of Smart City initiatives, which are being implemented or considered by municipalities across metro Atlanta, including those in Cobb County.

In January, the City of College Park in Fulton County announced a partnership with Comcast to install smart sensors that would alert designated leaders when city trash bins were full. Utilizing the MachineQ Gateway, Comcast’s sensors connected to the trash receptacles to address concerns by residents and businesses about overflow.

“For College Park to achieve its goal of becoming a smart city, we must begin to take a more progressive approach to how we operate and manage our services,” College Park Chief Information Officer Michael Hicks said in a press release announcing the installation. “Our partnership with Comcast opens the door for us to begin using technology to support our daily operations, making us more efficient and effective in the long-run.”

Hicks added that the smart trash receptacles were needed both to beautify the city and to improve its efficiency. “More important, however, was the need for our city to identify some additional long-term initiatives that we could eventually implement, which led us to Comcast,” said Hicks. “For example, we would like our growing business community to become more engaged with the needs of our residents and visitors. Clearly, having this technology at our disposal will be a game-changer for College Park in the future.”

The trash overflow issues were particularly pronounced near College Park’s MARTA station and near businesses along the city’s largest thoroughfares, Main Street and Virginia Avenue. The city also was able to increase the density of the trash cans so they could hold additional waste.

But trash bins are only the beginning of what Comcast’s smart cities technology can do. The technology allows cities to link up to 500,000 devices, paving the way for smart parking, smart traffic signals, smart pedestrian counters, and smart self-service devices at cities across metro Atlanta and nationally.

“We have witnessed other cities, such as Detroit, use our technology to provide indoor and outdoor surveillance for 24/7 real-time police monitoring, an initiative known as Project Green Light,” says Horwitz.

In Detroit, Comcast SmartOffice video monitoring was used to provide both indoor and outdoor surveillance to aid local police. The solution was both effective and cost-efficient, allowing small and medium-sized businesses to participate and link into the system.

Along with Comcast, Project Green Light was spearheaded by Detroit Mayor Mike Duggan and Detroit Police Chief James Craig. The program aimed to reduce crime and catch potential offenders in the act. Starting in 2016, police were able to access a live feed from on-site cameras, which were concentrated in areas most vulnerable to theft, such as convenience stores and restaurants.

The cameras record at resolution high enough to capture details like license plate numbers and individual facial features, and Comcast was able to reduce costs for businesses by offering an equipment leasing option, along with service and maintenance.

Duggan has described the program as “a true game-changer in helping to improve security measures across the city.”

After Project Green Light launched, Detroit reported a 50-percent crime reduction in locations where cameras were placed, and more success in post-crime arrests as well.

College Park is now experiencing its own sanitation improvements through Comcast, and the future will bring even more advancement as the company continues to innovate.

“College Park is part of a growing wave of municipalities in Georgia and across the country that are evaluating how smart-city capabilities can benefit their residents, businesses, and visitors,” says Horwitz.