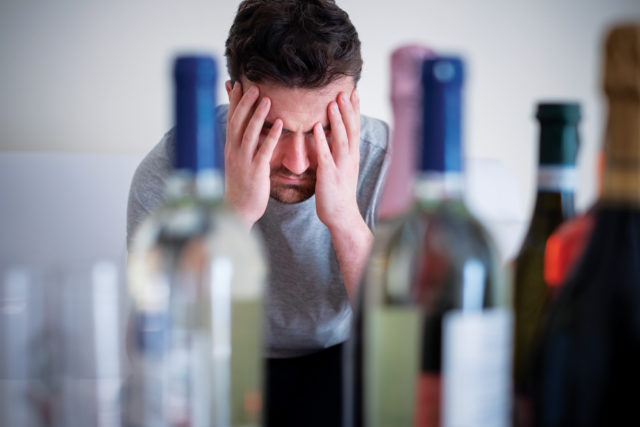 The abuse of alcohol continues to be a problem in the United States. The 2018 National Survey on Drug Use and Health reported that 70 percent of people surveyed had consumed alcohol within the last year, and 55.3 percent had consumed alcohol within the last month. What is significant is the number of drinkers aged 18 and older who meet the criteria for alcohol use disorder, and that number is at 8.5 percent, according to the Diagnostic and Statistical Manual of Mental Disorders.

“The difference between recreational use and alcohol use disorder is that people who have alcohol use disorder experience clinically significant impairment or distress that can be manifested in different ways,” says Jonathan Peeples, M.D. of psychiatry, WellStar Atlanta Medical Center. “These people may repeatedly drink more alcohol than they intended, and they may have difficulty cutting down on use. People can also become physiologically dependent on alcohol and experience withdrawal symptoms when they don’t drink.”

Use or abuse?
It’s important to understand the difference between someone who drinks alcohol and someone who has an alcohol use disorder. “Alcohol users who are low-risk drinkers are generally not preoccupied when they have another drink of alcohol. The use of alcohol is not obviously interfering in any area of their life,” says Vicki Favors, LCSW, clinical supervisor at Northside Hospital Outpatient Behavioral Health Services. “However, low-risk drinkers may still be in a heightened risk category based on other factors, such as having a medical condition that alcohol could negatively impact or if the person is underage drinking.”

Alcohol use disorders vary from mild to moderate or severe, and intermittent misuse of alcohol can lead to risky behaviors and contribute to health problems. “A person with a moderate to severe alcohol use disorder can progress to having difficulties related to mood, family, legal, medical and/or work issues,” Favors says. “An alcohol use disorder is a complex and progressive brain disorder that leads to changes in the brain that impact cognitions, behaviors, and physiology. As the disorder progresses, a person can experience more serious symptoms with a change in tolerance.”

Outside contributing factors include situations that involve the use of alcohol by a younger person, where alcohol use is normalized by family or friends. Factors also include adults spending time with others where the focus is socializing with other drinkers, or being in environments and relationships where the focus is use of alcohol. A third contributing factor is a person being under chronic stress or having an untreated mental health disorder such as anxiety, post-traumatic stress or depression. In attempts to manage the mood or stress level, a person can increase alcohol until it becomes a problem and exacerbates the mental health symptoms.

What can happen?
According to the Substance Abuse and Mental Health Services Administration, in the United States, 10.8 million full-time workers have a substance use disorder. The person abusing alcohol can drink after hours and/or may be drinking alcohol on the job. An employee’s problematic drinking can impact other staff and professional relationships. Substance use disorders cost companies between $33 billion and $68 billion annually.

“Alcohol addiction can make it difficult for a person to work effectively,” Peeples says. “Drinking alcohol at work may lead to termination. Even if someone with alcohol use disorder doesn’t drink at work, they may be experiencing withdrawal symptoms that make it harder to concentrate. Alcohol use disorder is associated with absenteeism, job-related accidents, and low productivity.

Alcohol and minors
In a Georgia Student Health Survey of 28,440 students, 19 percent reported having had their first drink at age 8 or younger. A driver of alcohol use in minors is the easy accessibility of it. In Cobb County, of the children who completed the survey and had used alcohol, 6.72 percent started using alcohol in elementary school, aged 10 or younger, while 8.44 percent started using in middle school, and 6.33 percent in high school.

“Nearly half of those who drank in the last month did so at their own house or a friend’s house,” says Jill Mays, director of Department of Behavioral Health and Development Disabilities’ Office of Prevention. “There are social norms around it, since alcohol is a part of celebrations, parties, and rite-of-passage events, and is seen on television and in media and social media.

“Social media adds pressure to establish identity, challenge authority, and assert your independence,” Mays continues. “So peer pressure today is far more intense and different from what some parents may remember from their youths. The media glamorizes alcohol.”

Signs you might look for in a minor using alcohol are changes in habits, friend groups, behavior at school, focus, memory, or physical appearance. The child may disappear for hours at a time, avoid eye contact, be dishonest about whereabouts, or become evasive with answers to questions.

As a parent, you must educate yourself and decide what message you want to send your child about substance abuse. Have a conversation with empathy, compassion, and an understanding of what the world is like for your teen or younger child when he or she leaves home each morning. The last thing you want is to appear judgmental, as that will shut a child down emotionally.

The most important thing to remember about early drinking by minors is that it creates a risk factor for alcohol use disorders later in life. Early prevention is key. As a parent, you can advocate for prevention coalitions in your child’s school and assure your child is participating in existing programs.

When you suspect alcohol use disorder
In approaching a person with a substance use problem, it is important to avoid blame and an accusatory approach, says Favors. Your agenda should be caring and sincere. Prior to approaching the person, it may be helpful to gather information on substance use disorders, and resources for community support and treatment.

Favors says to choose a time to approach the person when they are not using alcohol or experiencing after-effects of abusing alcohol. You might involve more than one supportive person in the discussion, such as a family member, friend, or person in recovery.

In conclusion, alcohol use disorders are treatable, but treatment is an ongoing process. The Cobb County community offers free meetings through organizations such as Alcoholics Anonymous, a fellowship based on the 12 steps of Recovery that support sober living.

Sober living and residential programs for substance use disorders offer a higher level of structure to maximize safety and relapse prevention. If a person is having withdrawal symptoms from alcohol, it is important that medical intervention be a first step at an inpatient psychiatric facility.

The Georgia Crisis and Access Line (GCAL) offers 24/7 free and confidential access to crisis services statewide. If you or someone you know is experiencing a behavioral health crisis, call 800.715.4225. Teens can text or chat with caring GCAL professionals through the MyGCAL app, available on the App Store and Google Play.