“The thing that drives our business, and the reason I’ve stayed with the company for so many years, are our core values,” says Randy Hall, president and CEO of Batson-Cook Construction. “We do our best to hire and evaluate according to those values. They define who we are.”

The core values at Batson-Cook are as follows: “We care about people and results; we are passionate; we always strive to do the right thing; we do what we say we are going to do; and we build strong, lasting relationships.”

Batson-Cook is a construction firm that was established in 1915 by W. C. Batson and Edmund F. Cook in West Point, Georgia, where it began operations in textile and mill village construction. In 2008, the company became a wholly-owned subsidiary of Kajima USA, but it still operates as an independent entity, employing about 550 people and recently opening its newest office location in a 33,340-square-foot facility off Paces Ferry Road in Vinings.

Hall has been leading the company since 2012, becoming the sixth president of the construction firm, but has been working in construction since the 1980s. “I grew up in central Alabama and went to school at Auburn University, where I studied civil engineering,” Hall said. “I worked my way through college as a co-op student with a construction company out of Montgomery, Alabama.”

In 1986, shortly after graduation, he was offered a job with an Atlanta area firm that specialized in commercial contracting. That’s when he says he just fell in love with construction. “I’ve never actually used my civil engineering degree as an engineer,” Hall said.

Hall joined Batson-Cook in 1997 as a project manager. He definitely earned his stripes, so to speak, commuting weekly to/from Charlotte, North Carolina, working on a high-rise project and later condo and park projects. “I was indoctrinated into Batson-Cook and surrounded by excellent people in the company,” Hall says. “I fell in love with the culture and business model.”

After five years on those projects, he returned to Atlanta full time and was asked to step into an officer role at the headquarters in West Point. That path led him to where he is today, leading a company he continues to admire.

Hall believes Batson-Cook has been successful for the past 104 years because while they are a larger commercial construction company, they continue to operate like a mid-sized, family-owned business. “Everybody feels like they own our core values and it shows in the work they do,” he says. “And as long as I’m in this seat, we’ll maintain that culture to the best of my ability.”

Breaking New Ground
In early November 2019, Batson-Cook opened and moved into its new office space in Vinings. “We had a committee assigned to look for the best spot for our employees for about six months,” Hall explains. “We looked at several options, but this one was attractive to us in large part because it puts us all on one floor. This space also has outdoor amenities that we can’t get anywhere else in a Class A office building.” 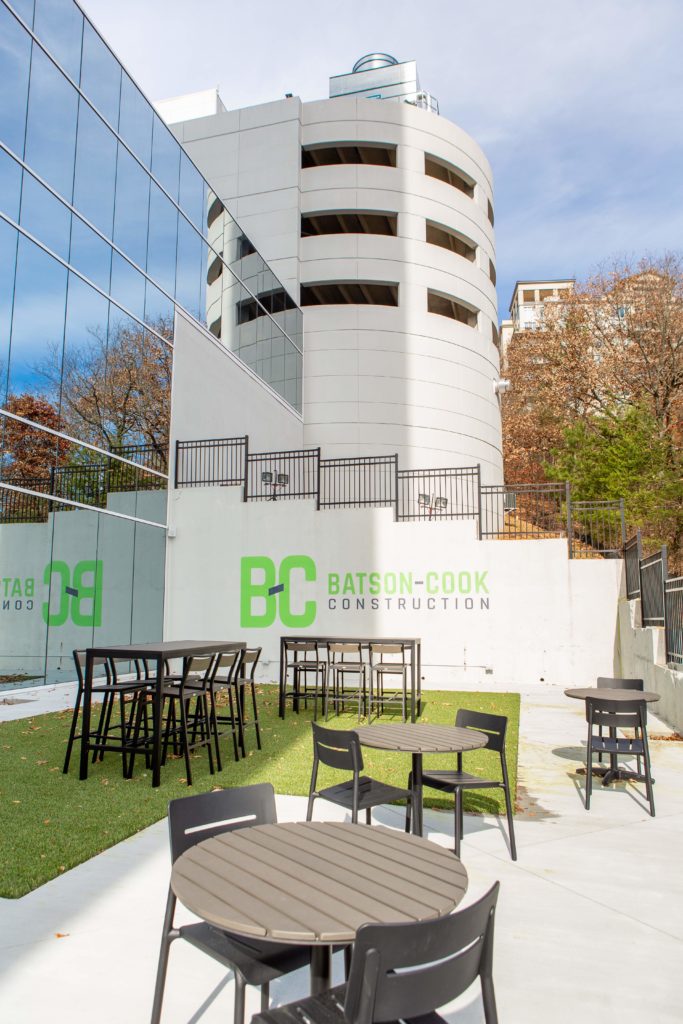 Even though Batson-Cook has eight office locations across the Southeast, most employees spend more time on jobsites than they do in the office. It was important to create a space that would allow jobsite employees to feel as included as possible when visiting. The new office is designed to promote communication and fuel collaboration. For example, couches and high tables nestled between traditional work desks invite employees to step away and take a break from those spaces and work with their colleagues. Additionally, the new location has two, furnished patios where employees can host meetings and enjoy the fresh air.

White noise is pumped through nondescript speakers, which have proven to help employees focus on their work without being distracted by every little noise. Modern lighting fixtures, which use both metal and cloth materials, add a flare of excitement. Printed graphics and wall art reinforce Batson-Cook’s rich history, core values, and commitment to safety.

As a subtle yet clever nod to its industry, Batson-Cook’s new office space features construction materials for decoration, as a variety of wood, plastic, leather, glass and even screws are found throughout. Windows allow natural light to filter into the workspace and give a 180-degree view of downtown Atlanta.

A few of the conference rooms also are fitted with the latest web-based collaboration materials, including Microsoft Surface Hubs for long-distance meetings, web cameras, and high-tech microphones. With an eye on health and wellness of employees, each desk features the ability to become a standing desk, putting less stress on the lower back of workers. Additionally, Batson-Cook subsidizes access to the local gym to promote physical fitness for employees.

“We also chose Cobb County because of its convenience to Hartsfield-Jackson Atlanta International Airport, as well as downtown Atlanta,” added Hall.

Why Cobb County?
The new office space also allows Hall and his team better accessibility to the Cobb County community, where they have led a number of important projects dating back several years. Batson-Cook is currently working on the county’s new Medical Examiner’s Office, but recent projects in Cobb include:

Batson-Cook is recognized for its projects in the Atlanta area like Northside Hospital Cherokee Campus, and Galleria office buildings 100, 300, 400, 600 and 700. Among the high-profile projects on which the firm has worked outside of the state are the Duke Energy Center in Charlotte, North Carolina the Alabama College of Osteopathic Medicine in Dothan and the Wolfson Children’s Hospital in Jacksonville, Florida.

Back in Cobb, Batson-Cook’s work has allowed the firm to form a relationship with Kennesaw State University’s construction program. “We hire a lot of students for internships through this program,” Hall says. “They are very bright, young people.”

Because of the high volume of students coming through that program, Hall adds that it’s important for Batson-Cook to continue to do well. “I tell our people all the time that we need to grow our business, if for no other reason because we have all these young people who are looking for a path upward and we need to be able to show them that path.”

“Cobb County is an easy community to do business in, so every project that we’ve worked on and every relationship we’ve formed has been a pleasure,” Hall concludes. “We just enjoy working in Cobb County.” 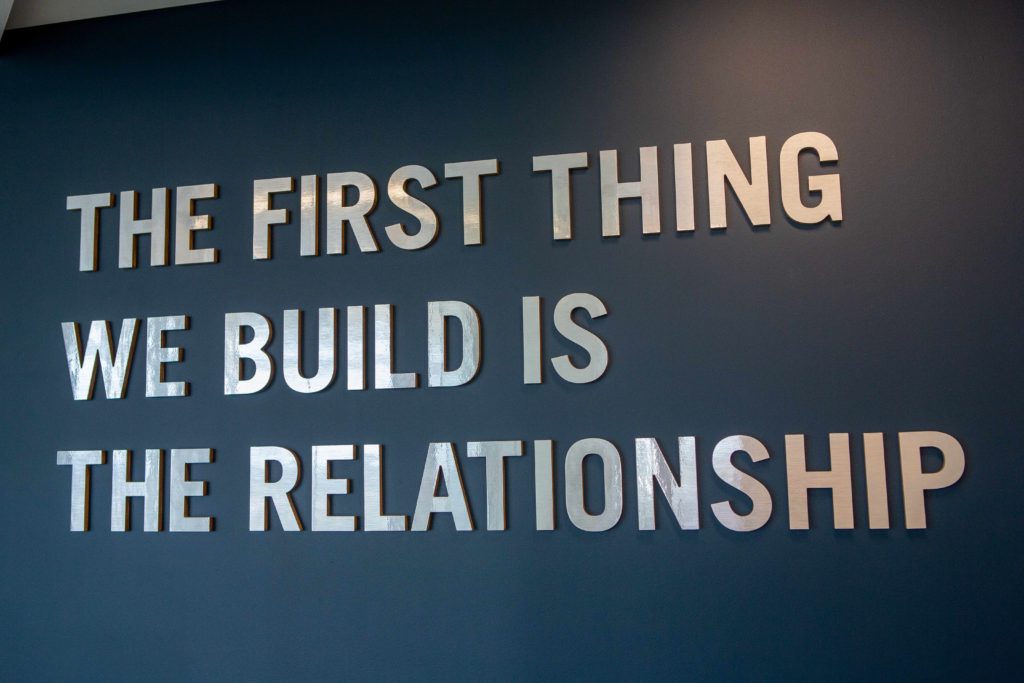