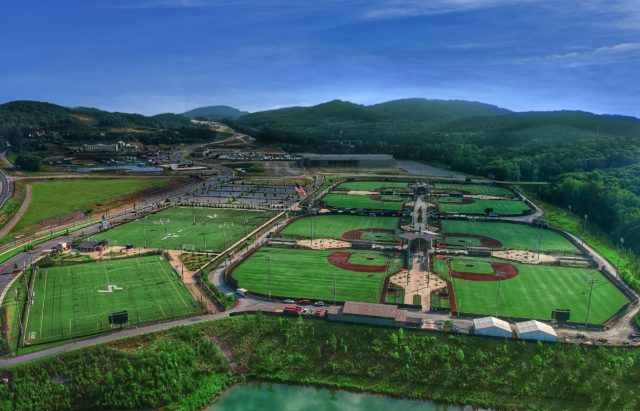 Atlanta-based LakePoint Sports is the major player in youth sports.

Metro Atlanta is known as a major sports destination. First, we are fortunate to have access to so many professional sports teams, from football to basketball to soccer to baseball to lacrosse and now, professional rugby. Second, we play host to major professional and collegiate tournaments every year. Third, we are the largest U.S. market for recreational tennis with the 80,000-member Atlanta Lawn Tennis Association. All of these sports provide billions of dollars to our local economy. Another major sports-related business that has a large, local and statewide economic impact is LakePoint Sports just across the Cobb County line in Emerson (Bartow County).

LakePoint Sports is known as the nation’s premier youth sports destination with a 1,300-acre campus that serves athletes in over 30 sports year-round, including what LakePoint Sports refers to as their seven, core sports: baseball, basketball, volleyball, soccer, gymnastics, cheer, and lacrosse. The campus features a 170,000-square-foot Champions Center with the world’s largest continuous wood floor where 12 full-court basketball games or 24, full-court volleyball games can play at once. In addition, LakePoint features eight Major League-sized baseball fields and three multi-use fields for soccer, lacrosse, rugby, and football, as well as a 10-court beach volleyball pavilion and wakeboard park. LakePoint Sports attracts more than one million visitors a year, creating nearly $100 million in annual economic impact.

“LakePoint Sports has a significant economic impact on the state and region based on the strong tourism and job creation from our sports business operations,” LakePoint Sports President Mark O’Brien said. LakePoint Sports offers a wide range of sports, events, and activities that reaches a cross-section of athletes and demographics,” stated O’Brien. On our busiest days, we’ll have over 10,000-plus athletes, coaches, scouts, and families on campus. LakePoint Sports is where the country’s top coaches and scouts come see the best athletes compete!”

LakePoint Sports has 32 full-time team members and nearly 200 hourly brand ambassadors who help to keep the operation running all year. Since its opening in 2014, LakePoint Sports has attracted more than five million visitors from all 50 states and more than six countries. The original idea of LakePoint Sports, O’Brien said, was to create the premier youth sports vacation destination. That vision still holds true today as LakePoint Sports continues to elevate the experience on campus for athletes, coaches, scouts, and family members. In 2019, LakePoint Sports launched a joint-venture with Prep Baseball Report (PBR), the number-one amateur baseball scouting service in the country, and the leader in tournaments and showcases for the sport. “This was their first year with PBR at LakePoint Sports and we’re really excited about the partnership and what we have planned for 2020,” O’Brien said.

Atlanta based LakePoint Sports is easily accessible as it’s only a two-hour flight from 80 percent of the country via the world’s busiest airport, and 50 percent of the U.S. population is within driving distance of metro Atlanta. Additionally, the campus is adjacent to I-75, providing easy access to one of the major interstates in the country. “Atlanta is also home to Fortune 500 and100 companies and four major sports properties, providing tremendous opportunity for new integrated partnerships and engagement, locally, regionally, and nationally,” O’Brien said.

Among those partnerships, each of the past four years LakePoint Sports has hosted the major youth basketball tournaments for Nike, Adidas and Under Armour and recently co-hosted the Jr. NBA tournament and a middle school basketball tournament with the Atlanta Hawks. And since 2016, the Champions Center has been used as an official training center for the World Famous Harlem Globetrotters. Each fall, the Globetrotters launch their global tour from the LakePoint Sports Champions Center. The Champions Center also has hosted some of the biggest and best volleyball through its partnership with Rally Volleyball and futsal (indoor soccer) tournaments and has even featured the growing sport of pickleball.

In addition to serving as the training campus for the Harlem Globetrotters, LakePoint Sports has partnered with the group on its anti-bullying campaign, visiting local schools to help kids. This is one example of how LakePoint Sports is helping the community and supports the organization’s Mission, Vision, Purpose and Values (MVPV). Additionally, LakePoint Sports is working with the Bartow County School District for other local outreach initiatives and will be announcing a new national partnership in January supporting its youth outreach and programming efforts. For more information on LakePoint Sports MVPV, visit LakePointSports.com.

Investing in technology
One of the core ways in which LakePoint Sports continues to maintain its’ position as the premier youth sports destination in the country is through investments and partnerships in technology. This past summer, the company announced a partnership with PlaySight Interactive to provide live streaming and video-on-demand technology. PlaySight is the global leader in developing AI camera software and high-performance video technology for sports coverage. The company has worked with professional teams in the NBA and MLB, as well as a significant number of colleges and universities, including the University of Georgia. This partnership establishes LakePoint Sports as PlaySight’s first “SmartCampus,” providing youth athletes, parents, coaches, teams, and fans with automated HD broadcast live streaming and video-on-demand thanks to more than 130 cameras installed across the campus, as well as advanced coaching and performance analysis tools. “By fully integrating PlaySight’s sports technology platform throughout the LakePoint campus, we will establish ourselves as the leader in connecting high-performance data analytics and video content aggregation with athletes, while enhancing the LakePoint experience and inviting family, friends, coaches, and scouts to enjoy unprecedented access from wherever they are in the world,” O’Brien said. “This partnership further solidifies LakePoint’s position as the ultimate authority in youth sports and our commitment to providing cutting-edge technology to all our guests.”

Additional technology integration with PlaySight will allow for unmatched opportunity for players to create personalized highlight reels to share as a video résumé, while also giving coaches the ability to tag plays and analyze video directly with their athletes on-site or online through PlaySight’s app.

A big campus is getting even bigger
If the governor takes time out of his busy schedule to tour your business, then you know you’re having a major economic impact on the state’s economy. That’s exactly what occurred in October as LakePoint Sports, Gov. Brian Kemp and First Lady Marty Kemp announced a major expansion with the opening of the state-funded parkway and access to, the North Campus of LakePoint Sports. Early next year, LakePoint will open a $39-million, 200-room hotel complex (the hotel brand has yet to be revealed) on the 500 acres South Campus adjacent to the Champions Center. The new hotel will feature a resort-style pool, food and beverage offerings, and a roof-top terrace above the restaurant for athletes and families to gather. Additional amenities are being contemplated with a focus on how best to serve athletes and travel teams.

“The hotel will address the number-one request of our athletes, families, and coaches: More hotel rooms on campus. The hotel, restaurant, and food and beverage offerings will directly complement events at the Champions Center and the entire campus, enabling our guests the added convenience of staying on campus near their events and activities.,” O’Brien told Cobb In Focus.

Gov. Kemp and the First Lady joined the City of Emerson and Bartow County in celebrating completion of the 1.3-mile parkway connecting Old Allatoona Road to Red Top Mountain Road, which now connects the two ends of the LakePoint campus. “Our vision is for a vibrant development that features experiential retail, acclaimed restaurants, new lodging opportunities for our guests, and an expansion of venues and fields to create a complete sports and entertainment experience for all who come here,” O’Brien said during the October press event. “The completion of the parkway is essential to opening up new development and increased visitation, economic impact, and job creation.”

“LakePoint Sports is a remarkable asset for greater Metro Atlanta and North Georgia, and we appreciate LakePoint Sports for promoting family time together, creating new jobs in our state, and encouraging young athletes to compete at the highest levels,” Gov. Kemp said at the October news conference.

“This has been a very strong public-private partnership at LakePoint Sports,” added Bartow County Commissioner Steve Taylor. “And we’re thrilled for what that means for the continued economic growth of our region.”

There is potential for further development at LakePoint, O’Brien said. The company has additional acreage along Lake Allatoona that could be built upon. However, the company is careful about its growth, so there are no immediate plans. “We’re looking at the North Campus as a priority in terms of what we can develop, and how to further enhance the campus and evaluate and further augment what is in place today,” he said.

“We’re excited about 2020 and all the new offerings, partnerships, and events that will be on campus,” O’Brien added.