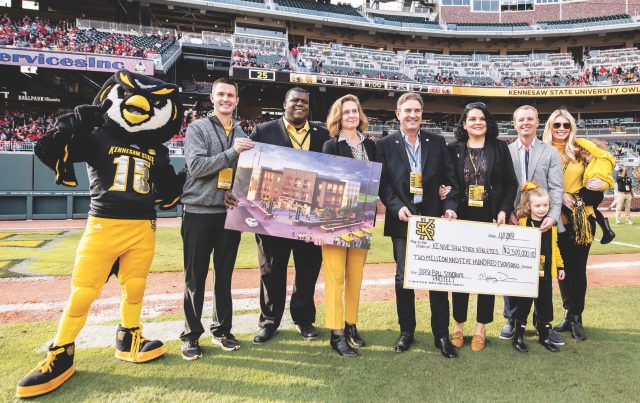 KSU asks Cobb businesses to step up to the plate for continued economic growth.

Kennesaw State University’s explosive growth in recent years contributed to $1.4 billion in economic impact on Cobb County last year. KSU Athletics is one of the biggest playmakers, especially since it launched its football program four years ago. The university joined the Big South Conference in football and has hosted more than 52,000 fans during each of its home games every season, proving to be an economic powerhouse in Cobb County. “If you own a business or are a resident, you see your parks are getting nicer and you have more amenities,” said KSU Athletics Director Milton Overton. “That’s because of tax dollars, and KSU is responsible for a big piece of that.”

The university has had a clear impact on the community. What’s not so visible is the community’s impact on the university and its students. This phenomenon inspired a recent branding effort called OneKS (or #OneKS if you’re on social media). “We have a goal of winning championships, graduating young men and women, and building a better community,” said Overton.

KSU’s next big power hit
The Athletics Department has accomplished incredible feats in recent years, but Overton says they’re just in the first inning, so to speak. KSU Athletics launched a $7-million fundraising campaign to fund improvements to the school’s baseball facilities, which will benefit the athletes, KSU sports fans, and the community as a whole. The complete facility will be renovated, including the field and the dugouts, while adding a visitor-friendly courtyard, a new grandstand and premium seating. Phase I of construction will begin next year.

The fundraising campaign hit its first home run last September when Mickey Dunn, president and CEO of automobile parts supplier ML Industries, committed $2.5 million. His company is a leading manufacturer of items such as airbags and automobile seat covers.

Dunn himself was a student-athlete, enjoying a standout baseball career for the Southern Polytechnic University Hornets from 1978-81, when he earned all-conference and all-district honors. His gift is the largest, one-time donation KSU’s Athletics Department has received, and is one of the most impactful gifts from an individual donor to the university.

“I would like to say that Kennesaw State University is one of the top universities in the state, as well as the entire country, and I feel extremely blessed and honored to be a graduate of this wonderful institution,” Dunn said in a press release announcing the donation. “It is also exciting to have a small part of helping a phenomenal baseball coach, Mike Sansing, and the KSU baseball program to become one of the top programs in the country.”

The winningest coach in Kennesaw State baseball history, Sansing is seventh in total wins among active Division I head coaches with 1,121 victories. He has led the Owls to seven national tournaments, including a pair of national titles. The team won the NAIA title in 1994 and the 1996 NCAA Division II crown.

Building a team of community support
Overton recently visited a Cobb Chamber of Commerce meeting to talk about KSU’s students and the athletic program’s success. With a good-natured smile and obvious pride in his students, he answered questions such as: How are recruits looking? (“Strong.”) Are you visiting Cobb schools? (“Most definitely.”) And then he invited everyone in the community — not just the athletes — to be part of KSU’s team.

“At KSU, we are building champions on the field, in the community, and in the classroom with academic integrity and excellence,” Overton said. “By pulling together as Kennesaw State and as Cobb County, we are able to unite as ‘OneKS’ and help build a family in this community.”

Flanked by several players, he also talked about the community investing in these athletes, some of whom have 4.0 grade point averages. They depend on the community around them to offer sponsorships and to fund scholarships, but beyond that, to coach students for life after sports.

One way businesses work with student-athletes under Overton’s campaign is through a program called “Flight Plan.” One important part of the program focuses on career readiness, teaming up with Cobb County businesses to give athletes the opportunity to shadow and intern at various jobs. “I get calls from Cobb County businesses who want to hire student-athletes,” said Randy Kennedy, director of Student-Athlete Success Services. “Athletes understand competitiveness and drive to succeed. Those traits make them successful as athletes and employees. We’ve had students graduate and go to work for many local businesses, including Henssler Financial, Mohawk, and Chick-fil-A.”

Whether you’re more excited about a renovated baseball complex or giving students a  chance to become future entrepreneurs, Overton’s message is clear. With 35,000 enrolled students and 110,000 alumni, KSU is good for business in Cobb. “We need major givers, we need planned givers, we need people who can give $25,” said Overton, a first-generation college graduate who personally understands the impact a business’ support can make.

“Had it not been for a scholarship to play football, I wouldn’t be here,” he said.

If you’re interested in learning more about supporting the fundraising campaign and shaping the future of these student-athletes, call The Owls Fund at 470-KSU-OWLS or visit KSUOwls.com.