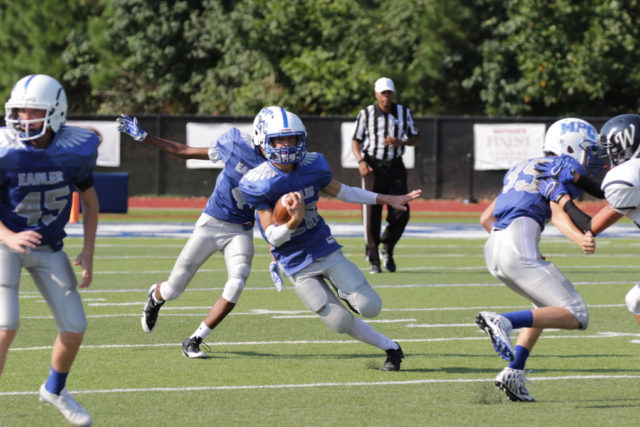 A young and growing athletic league for metro Atlanta’s premier private middle schools is preparing them for the future, in more ways than you can imagine.

Craig Wilson, a friendly guy who grew up in Cobb County, sat in his campus office to talk about the Metro10, an athletic program for middle schoolers that is entering its third year. He is the middle school athletic director at Mount Paran Christian School in West Cobb where around 85 percent of nearly 320 students play sports.

He hails from a school that doesn’t refer to sports as “extracurricular.” Sports and arts are referred to as “co-curricular” because of the value they have in building a student for success. Every student is encouraged to participate in sports or the arts.

Sports assist for academic performance
When asked, Wilson laughed and agreed to play along with a visualization exercise. He closed his eyes and pictured a student-athlete who achieved success on and off the field. But he quickly pictured a student who used to have behavior problems in sixth grade. He explained that her teachers couldn’t get her to care about her academic growth. The teachers asked Wilson for an assist. He identified the student’s physical strengths and encouraged her to go out for the volleyball team.

“Not only did she make the team, [but] she excelled through middle school, high school and was offered a college scholarship,” he said. “She ended up with a 4.0 [grade point average] and played at the state championship of her last season.”

Pardon the pun, but that’s quite a spike in excellence.

“I think what happened with her was she excelled so quickly in the sport that she became a leader,” Wilson said. “Kids started to follow her. Her leadership ability was a lightning bolt for her. She decided to do it in [volleyball] practice and the classroom.”

Although this is an inspiring story, it’s a pretty common one. Sports can help kids learn leadership, how to be team players, and give them incredible amounts of motivation.

A middle school league of their own
Even so, the private school coaches of metro Atlanta thought they were missing the mark in some ways and created a league to fill the gap. The league for private middle schools, known as the Metro10, was created to help build students and school communities with full schedules, games with consistent rivals, and the opportunity to play in playoffs and championships.

Wilson and coaches from other schools joined to create the Metro10 League. They committed to make the middle school athletic experience rich and positive for all who experience it.

Crissy Watkins serves on the board of the Metro10. She was the athletic director at Whitefield Academy when the league was formed.

“Prior to this league’s development, there was a lot of variation and inconsistencies as to what a season looked like from one team to another, and even from one season to the next,” she said. “Some teams had full schedules and participated in the NAML (a smaller middle school league); others weren’t in a league and had far fewer games or matches. Some had playoffs and championships; others did not. Rules also were often unclear, and at times, coaches didn’t have a clear point person to reach out to at other schools.”

But things changed going into its third year in the fall of 2018. Mount Bethel Christian Academy joined the league, bringing the total school count to 11. Wilson says that could potentially mean a name change for the Metro10 in the future.

Goal setting for athletics and the future
No matter what they decide to call it, the new league has given teams and student-athletes across metro Atlanta a chance to set goals and reap the benefits. “You’ve got to have something to strive toward,” Wilson said.

The new head football coach and assistant athletic director for Middle School Sports at Whitefield Academy couldn’t agree more. Coleman Joiner remembers a student who struggled with academics and cared only about football. But his grades slipped and he faced losing the opportunity to play sports. With Whitefield’s academic counselor, his coaches and his teachers, the student visualized a new reality for himself and became NCAA eligible for a scholarship when he was a senior. Setting and achieving one goal — remaining eligible to play football — helped prepare him for college and a bright future.

Joiner said 93 percent of his middle school students play sports, which helps them focus better on academics. “In our world at Whitefield, the academic rigor … is pretty extensive,” he said. “With how much attention they put into their academics, it’s essential to relieve some of that pent-up energy.”

Sports are a training ground for student-athletes to prepare physically, mentally, and spiritually. While pursuing their passions in the athletic arena, student-athletes are guided by teachers and coaches who help manage the students’ time and talents so that the transition between eighth grade and ninth grade is seamless, both athletically and academically.

“It’s no coincidence that after the first few Metro10 championships were won, the overall interest in standings and playoffs increased at the middle school level,” Watkins remembered from her time at Whitefield. “They’re experiencing and learning so much through sports in the middle school years. They’re learning what Christ-like character looks like in winning and in losing. They’re learning about what they can accomplish both as individuals and as teammates. And they’re learning how rewarding it is to honor God by maximizing and leveraging all of the talents he has blessed them with.”

For more information about the Metro10, visit www.metro10.org.