When teens and adults face legal trouble, the Frye Law Group is there to help prevent it from derailing their lives.

There was once a time when, if the police caught a few teens drinking alcohol, they would pour out the containers, scold the youngsters, and make sure they got home safely, explains Kim Keheley Frye, managing partner and founder of Frye Law Group, a Marietta firm specializing in criminal defense. “That kind of stuff doesn’t really happen anymore, and you can’t depend on that to happen,” she says.

The landscape today
Crimes of all classifications are taken seriously today, and technology makes it easier for people — especially teens and young adults who often use technology at high levels — to incriminate themselves. A message that may have been posted or sent as a joke or exaggeration can appear as prime evidence to law enforcement and prosecutors. “Sometimes, kids will come to me, and they still don’t think it’s that big of a deal,” says Frye. She helps them understand that these choices are in fact a big deal to their future. Kids often will say to her, “‘Well, I didn’t really mean that.’”

Current events mean the police are no longer likely to give someone the benefit of the doubt for lesser crimes like vandalism and pranks, explains Frye. She says that many times, her clients don’t understand the trail they’re leaving behind on social media and in messages. “Anything — pictures, threats, all kinds of things — that you put on Snapchat, WhatsApp, Kik, it’s not really going to disappear. Somebody’s going to have that, and that could cause a lot of problems,” Frye says. “Instagram, Facebook, Snapchat, the authorities can get into pretty easily. So, if you’re taking a picture of yourself with a gun and putting it on Instagram, they’ll have that. These are the kinds of things that kids just don’t even realize.”

What can be worse, she explains, is that, while it’s easy for the government to get ahold of these items as evidence against the poster/sender, it can be difficult for the poster/sender to retrieve items that have “disappeared” or been deleted for their defense. “That conversation might exonerate you in that situation, but we can’t get it. The government’s not going to try to get it, and they’re the only ones that can, really,” Frye says.

And being suspected or accused of criminal activity can dramatically alter a young person’s future. “A lot of people don’t realize that even one minor arrest can take months, sometimes years, depending on when you’re arrested, to get resolved,” Frye says. “While that’s pending, that can have huge effects on where you go to school, what kind of jobs you get, whether you can have a job in another state. In some instances, whether you can go into another country. “Unfortunately, in our system, the only way to make it fast is to basically plead guilty and accept whatever the government wants to give you, and that’s again a situation where people can be taken advantage of.”

Convictions, of course, also have consequences. Frye explains that it’s common for colleges and universities to ask applicants if they’ve been convicted of a crime, especially for anything alcohol related. A 2009 survey by the Center for Community Alternatives found that having a criminal record can potentially derail an acceptance. Additionally, those who may want to join the military right out of high school, won’t be able to if they’re on probation, Frye says.

When it comes to future career opportunities, she explains that convictions can potentially bar people from professions that require licenses — medicine, law, real estate, and insurance, for example. “I get tons of people wanting me to early terminate their probation or get their records cleared off because they find out later in life how much trouble something that they weren’t prosecuted on, that they just got arrested on, can cause them,” says Frye.

Knowing who’s on your side 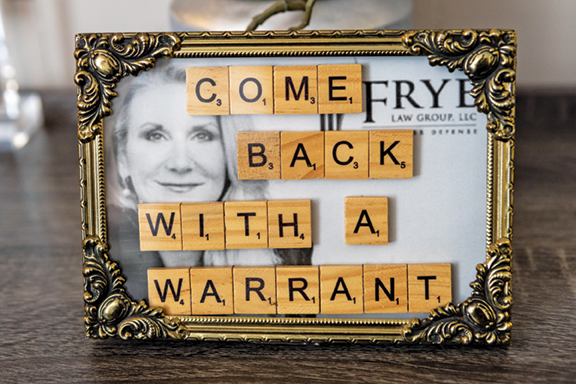 For all her clients, Frye stresses the importance of looking out for themselves and using their constitutional rights to protect themselves from the legal system when they’re suspected or accused of a crime. For parents especially, Frye says it’s vital to remember this. “If a police officer wants to talk to their child, a parent should not waive their constitutional rights for them without talking to a lawyer,” she says. “I’ve had so many parents be brokenhearted because they thought the police officer or whoever they were talking to was trying to help their child, and they allow them to speak to their child. Their child makes incriminating statements, and they were the architect of them doing that. A parent might say, ‘Oh, well, just tell the officer the truth because that’ll go better for you.’ That’s not typically the case. And a lot of people ask police officers, ‘Do I need a lawyer now?’ Well, they’re not going to tell you that you need one.”

She suggests not only getting an attorney right away, but finding one who specializes in criminal defense and is familiar with the area a person is facing charges in. “Knowing the ‘lay of the land’ is important. We’ve got 11 superior court judge positions. We have 12 state court positions. We have four juvenile court judges. We have multiple magistrate court judges. So, just right here in downtown Marietta, you’ve got 30-plus judges and all of them are a little bit different. And you’ve got prosecutors in the individual courtrooms, and all of them are a little bit different,” she explains. “So, knowing how they’re going to handle something or knowing some of the things that particular prosecutor’s office does like diversion or accountability court and things like that are helpful.”

Frye says criminal defense is a common specialty for attorneys to dabble in and that people may be tempted to hire an attorney who does a little of everything but that’s not the way to go. “We specialize in only criminal defense and the reason we do that is because we’re really good at that. I’m not going to do your divorce. I’m probably not going to take your car wreck case. But I know a good attorney who can do it, so I’m happy to let you know who to call for that, but we really just want to help people who are in trouble,” she says. “We see some people who feel like there’s no future, there’s no hope, that they’ve messed up beyond reason. And we try to get them past that.”

Her firm commonly handles cases for people of all ages who’ve been accused of a crime for the first time. Frye says that people who come to her often never thought they’d be in this kind of situation. “It’s been really empowering to fight the government and to stand up against them no matter what for your client,” she says. “People ask me all the time, ‘How do you represent guilty people?’ And I tell them every time, ‘I don’t represent guilty people. I represent people.’ Interest in guilt is for across the street. I’m not worried about that. I don’t want them to go this alone. I don’t want them to not be protected when the government’s coming for them.”

Frye says it’s also rewarding to help people who may have been struggling with mental illness, substance abuse, or simply going down a bad path turn their lives around. She explains, “I always say this to people, ‘This can be your first arrest or your last, which one do you want it to be?’ Especially when it’s a young person. It’s just trying to get people to understand that these experiences are recoverable from and that we’ve just got to work through the system.”

She knows the system well, and more importantly, how prosecutors think. Before she started Frye Law Group in 2008 so she’d have more freedom with her schedule to care for her oldest son, Frye was a prosecutor. You’ll find evidence of her tough reputation from day one in her office. “There’s a frying pan here that’s engraved with ‘Maximum Frye,’ and I think, actually, one of our current judges is the one who gave it to me when I left prosecution,” she says with a laugh.

What started with Frye answering her own phone has now grown into a team of five, including herself, and helping more than 1,000 clients over the years. The firm offers criminal defense, pre-arrest criminal investigations, expungement and record restriction, Marietta academic misconduct defense, probation termination, and sex offender registration removal services. Frye says, “I know very few people who’ve never broken the law at all, you know, speeding or parking illegally or anything like that, but they just don’t think it can be as bad for them because they’re a good person. Well, good people get arrested all the time.”

Because many of the cases the firm takes on rely heavily on scientific evidence, the team stays up to date on the latest field and lab testing procedures. Additionally, Frye says the team prides itself on its creative solutions and works to get clients’ lives back to as close to normal as possible. “It doesn’t have to just be what the state says it is. We try to create different opportunities. We try to give the government an option to not put our clients in custody or to not give them strict probations. We try to be flexible and creative that way,” she explains.

Frye understands how important that flexibility is and how those outcomes can help protect her clients’ futures. She also knows that an arrest or a conviction always leaves a mark, she says, but she aims to mitigate that mark for her clients. “We’re all going to make a mistake,” she says. “But does that mistake have to ruin the rest of your life or change the trajectory of your life?” In 2021, she launched the Frye Law Group Onward Scholarship to provide one or more local high school seniors who’ll be first-generation college students but have had run-ins with the law and may not have the best academic record with $1,500 for school expenses.

The scholarship is one Frye has a personal connection to since she was the first person in her family to graduate from college. She originally had her heart set on going into politics, and says, “I went to [The University of] Georgia as a psychology major but switched to criminal justice pretty quickly, and I relate it back to high school and middle school in that, I think, that’s where I really learned that people wouldn’t really stand up for me. …I realized that standing up for other people and protecting other people is so important. I represent a lot of young people and though parents love and take care of them, sometimes they don’t feel that. So, it really helps the kids sometimes to have somebody really go to bat for them that’s not a person that’s supposed to.”

Saved Energy Is The Best Energy