“We started in what was the Canton Village Shopping Center, and it was originally called Super Hair,” recalls Lester E. Crowell Jr., managing partner at Three-13.

Crowell and his wife, Marian, started working at the salon in 1976, with Three-13 Salon co-owner Tony Lacey joining the team the following year. The three bought out the original owners in 1984, renaming it Super Hair Three-13.

The salon name, Crowell adds, “three is spelled because it is three people and 13 is their lucky number.” “Marian and I actually got married the same year the salon was started in 1974, and on March 13,” he says. “This March marked 48 years since we were married and 48 years since the salon started.”

Upon taking over ownership of the salon in 1984, Crowell says they had nine employees and have steadily grown since. They now employ about 90 people and serve approximately 1,300 clients a week. And with growth, came an opportunity to move into a larger space. In 2002, they moved into their existing location at 2663 Canton Road, expanding their footprint from 6,600 square feet to 13,000. They also recently renovated the space, refreshing the décor and equipment so that they can bring the highest quality and newest tech to staff and guests.

“We always have to keep growing and keep up with the trends,” says Christina Herrera, director of operations, who has been at the salon for 22 years. “We just finished up the last of our renovations, which includes all new porcelain flooring throughout the salon, all new stations, new mirrors, new shampoo bowls and chairs, and a VersaSpa spray tan booth.”

Thriving During Difficult Times
When the COVID-19 pandemic shut down salons, boutiques, and spas all around the world in early 2020, it was devastating. That was no different for Three-13, but they persevered. “We were actually the very first salon in the United States that opened after the pandemic,” Crowell says. “We had so much press here on opening morning, Friday, April 20, it was almost like we had opened our business for the first time. It was so exciting and scary at the same time.” 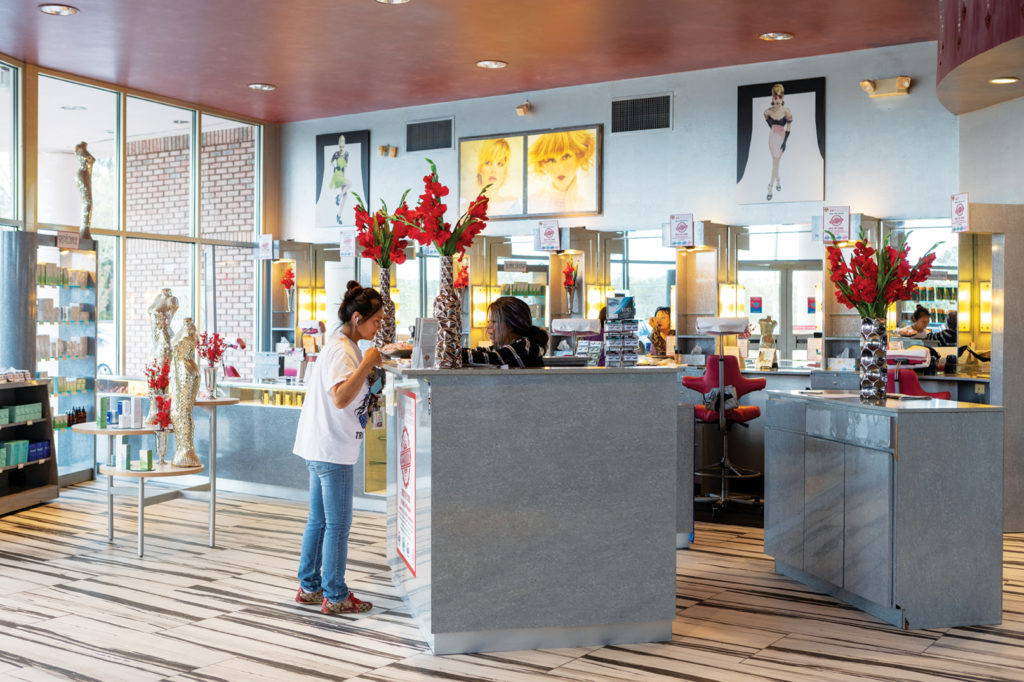 Approximately 75 percent of their staff came back that weekend, with the rest returning over the following weeks. And they have continued to grow, business-wise. 2021 was their best year yet, and it looks like 2022 could be even better.

Herrera credits their business model and the confidence they’ve built within their team for their continued success during a global pandemic. “We were meeting up here while we were closed, knowing we’d have to come back differently,” she says, “and we started buying supplies, gloves, masks, sanitizer, and hospital-grade disinfectants. We also started talking to our cleaning crew that comes in every night and does a general cleaning. We contracted them to do the electrostatic hydro-chlorinated spray, which is the same thing they use in hospitals and schools. We were doing that every single week.”

Something they discovered during those initial meetings was spectacular — it just so happened that every hairdresser’s station from the center of a chair to center of the neighboring chair was exactly 6 feet. “It worked out pretty perfectly for us!” says Herrera.

The Three-13 team also was consistent with checking guests’ and staff members’ temperatures upon entry into the salon, and they’d answer a series of screening questions to make sure there wasn’t a possibility anyone was sick and could bring the virus into the business. “We had so many clients coming in here just raving about how safe we made this environment,” Herrera adds. “Several people said they felt more comfortable here at Three-13 getting their hair done than they did in their own grocery store because of the precautions we were taking to ensure that our guests and employees were as safe as we could possibly make it.”

The best part: Three-13 has added nearly 20 employees since 2019, and they haven’t had to let anyone go. “When Gov. [Brian] Kemp announced that salons and barber shops could reopen, we called a meeting in our parking lot and we brought our staff here and asked their opinions,” Herrera says. “We didn’t want to tell them what we were going to do. We wanted feedback from our staff, and for them to feel like we were doing everything that we possibly could to help them feel safe.”

And the staff felt confident that the Three-13 team would go above and beyond to make their business extra safe because one of their very own was immunocompromised. Crowell, who has had two heart transplants, had to stay healthy and safe, and he wanted to make sure that the salon was just as safe for his employees as it was for him. “They trusted that we were going to be overly cautious,” he said.

“They Are Angels.”
Crowell’s two heart transplants are also why Three-13 has successfully held an annual fundraiser — Angels of Life — in support of the Georgia Transplant Foundation since 2011. To date, they’ve raised $707,313 for the statewide nonprofit. “My first heart transplant happened about five days after I was placed on the transplant list, but with the second one, it was about a year before I got the call, and I honestly didn’t think I’d get the second heart transplant,” shares Crowell. 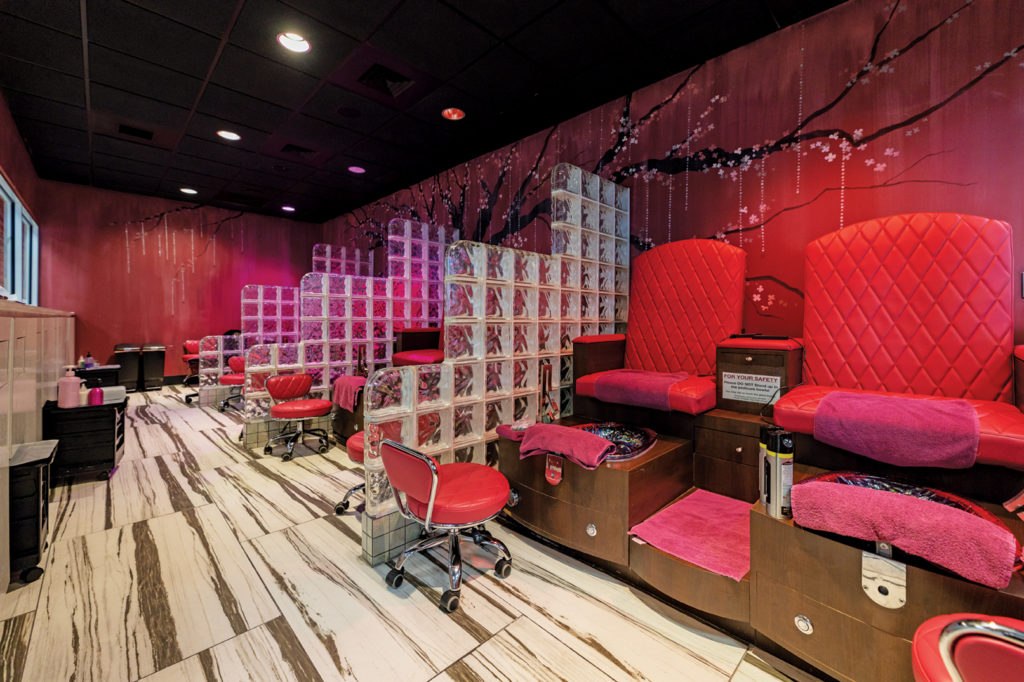 But when he did get the call on Friday, Dec. 3, 2010, at 5:45 a.m., he was ready. And shortly after waking up from his second transplant surgery, Crowell started texting Herrera to figure out how Three-13 could support an organization that does so much for transplant recipients and donors. “Angels of Life just came to me, and it’s such an appropriate name for people who donate their organs to save others,” Crowell says. “They are angels.”

The first event was held in the summer of 2011 and later moved to October of each year. Last year, they collected $100,000 for the Georgia Transplant Foundation, and they have always had a goal of hitting the $1 million mark during their 13th annual event. The 12th annual event will be held Sunday, Oct. 16, at the Cobb Galleria.

Angels of Life includes a fashion show in which the Three-13 team helps style about 30 models, who are clothed by a local boutique. The event is broken into four different sections. Someone who has received or donated an organ will share their story, then a high-energy fashion walk will follow. They will then host a live auction, all while a silent auction with 250-plus items is being hosted throughout the evening. “We’ll do this four different times, and also take time to recognize our Halo Award recipient, which is for someone who has helped us out a lot for that year’s event,” Crowell says. “It’s a really fun night!”

The event attracts roughly 700 guest each year which makes it a hot ticket not just for patrons but for sponsors as well. Over the 11 years, the event proudly boasts its expanding sponsorships from national businesses, such as Yamaha and Regions Bank, to the cherished local businesses, such as Superior Plumbing, Krantz Chiropractic, Pruning Guru, and Ernst Concrete just to name a few on a very long list of local businesses who support this notable event.

Three-13 employees also step up for other events and fundraisers throughout the year. Crowell says they help support their partners at MUST Ministries and Piedmont Church, which is nearby. They also host food drives and go above and beyond to give back to the communities they serve. They were proud to be the title sponsors for the inaugural Super Women’s Conference, which supports women in business with the Kennesaw Business Association. They are now on the board to expand that event.

“It feels amazing to see our business continue to grow year after year, but I think it’s important for our guests and our community to see us out there doing the work and not just living in the light,” Herrera concludes. “We work to keep our finger on the pulse of the community. We are doing whatever we can to help.”

Award-Winning Apprenticeship Program
For Three-13 Salon, Spa & Boutique, offering an apprenticeship program has been a top priority since the beginning. In fact, managing partner Lester Crowell was the very first apprentice at Three-13. And the program that started with just one person has grown tremendously over the past five decades.

“We’ve licensed more than 1,300 individuals into our industry,” says Christina Herrera, director of operations at Three-13. “We take people who don’t have any formal training in hairdressing or aesthetic manicuring and we teach them.”

Three-13 has an education team that provides apprenticeship opportunities for almost every service provided at the salon and submits hours to the state for licensures. They work with anyone, whether they are right out of school or have never been to school before.

“We have three educators in our hairdressing department, three in our technical, and two in our spa, and we also train in our guest services,” says Lester E. Crowell Jr., managing partner at Three-13. “We have an extensive training program that we do every Wednesday morning. We get to train them in our methods and our way, which is very important.”

This program also is one of the top reasons Three-13 was named the Cobb Chamber of Commerce’s Small Business of the Year in 2020.

“We have been around for 48 years, and we’ve been successful because of our level of service and our level of customer service,” Herrera adds. “With the opportunity to train them from the beginning, we know that we are training the absolute best hairdressers, color technicians, estheticians and manicurists in the area.”

Against All Odds—Sharing Our Success

A Surgeon’s Hand And An Artist’s Eye