In the November 2020 elections, Cobb County voters decided that — for the first time — they wanted an all-female County Commission, led by newly-elected Commission Chair Lisa Cupid, who previously had served two terms as District 4 commissioner. Fellow Commissioners Richardson and Sheffield also are new to their positions, while Birrell and Gambrill won re-election. Cupid is the first chairwoman and first black head of county government in Cobb’s history, as well as the first Democrat to hold the office since Ernest Barrett in 1984. With so many changes, Cobb In Focus wanted to provide this opportunity for you to get to know your Cobb County Board of Commissioners a little better. 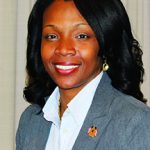 Lisa Cupid is Commission Chairwoman of Cobb County and has served on the Cobb Board of Commissioners for eight years as commissioner of District Four. Some accomplishments during her public service include championing Cobb’s newly instituted Sunday transit service, improving citizen education and engagement in government, and advocating for enhanced public safety measures, including the use of license plate readers, additional body cameras, and a public safety nuisance abatement program. Cupid is known as a strong advocate for the fair treatment of all of Cobb’s residents and stakeholders regardless of geographic, demographic, or economic standing.

In her new role as Chairwoman, Cupid plans to be “all-in” for Cobb by strengthening a foundation of integrity, fostering intelligent decisions, being inclusive, supporting innovation, and investing in Cobb’s residents, infrastructure, and future.

Cupid is an attorney and former mediator, policy analyst, and manufacturing process engineer. She resides in Austell with her two children and husband who is also an attorney, law partner, and former electrical engineer. Both are graduates of Georgia Tech and Georgia State Law. The Cupid family attends Buckhead Church. 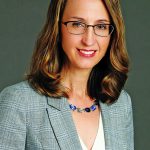 Keli Gambrill has been active in bringing responsible development to West Cobb for the past 13 years with People Looking After Neighborhoods. Keli recently served on the Green Meadows Preserve Friends group, Stout Park Steering Committee, and the 2040 Comprehensive Land Use Plan Committee. She has worked for several small businesses here in Cobb County and has a bachelor’s in accounting and finance. An avid equestrian and accomplished rider, Gambrill also is a judge for dressage shows. She is married to her husband of 20 years, Bob Gambrill, and they have one son. 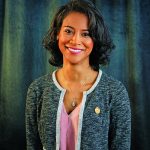 Commissioner Jerica Richardson represents the eastern part of Cobb County, which includes Smyrna, Vinings, East Cobb, Cumberland CID, and other parts of unincorporated Cobb County. Her platform is predicated on the idea that when we are connected, we can empathize, and overcome any challenge. Being a diverse metro county, her primary goal is to use the challenges the county faces to elevate conversations that communities around the country should be having. Such challenges on the horizon include rapid and diverse growth, balancing development demands, environmental stability and technology, discrimination, trust in law enforcement, recession-proofing the community, and long-term wealth gaps and inequality. She believes in working closely with the community and that there are only permanent interests in advancing the public welfare.

As a private citizen, Richardson is a Georgia Tech graduate in biomedical engineering, and works full time as a program manager at Equifax. She also is a small business owner and author. 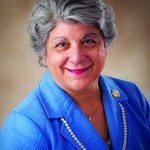 Commissioner Birrell is a 24-year resident of the county and was first elected to the Commission in 2010. She has previously served in numerous community organizations, including as past chair of Keep Cobb Beautiful and the Neighborhood Safety Commission. During her first term, Birrell initiated the Keep it in Cobb Program and established the Canton Road Redevelopment Committee. She also worked with staff to amend the purchasing ordinance to include a local vendor presence clause and launch the How to do Business with Cobb seminars where business owners can learn how to become a vendor with the County and meet County representatives that make purchasing decisions.

During her second term she continued to work on revitalization and economic development opportunities. She co-chaired the U.S. Army Field Band and Soldiers Chorus concert at Lassiter Concert Hall on Veterans Day. She also launched Superior Pets for Patriotic Vets to pair homeless Cobb County Animal Shelter pets with military veterans and was on the steering committee in 2018 to honor Vietnam Veterans on the 50th Anniversary in Cobb.

JoAnn and her husband, Dave, are members of the Catholic Church of St. Ann in Marietta where they serve as Extraordinary Ministers of the Eucharist and volunteers for Meals on Wheels. JoAnn also served as a board member of the McCleskey/East Cobb YMCA from 2012-2015. She currently serves on the board of the Lance Corporal Skip Wells Foundation.

Birrell received the Outstanding Citizenship Award and the Lydia Darragh Medals from the Captain John Collins Chapter of the Sons of the American Revolution (SAR) in 2019, the Elected Official of the year award from Keep Georgia Beautiful in 2017, and the American Business Women Association’s Outstanding Community Service Award in 2016, among many other honors. 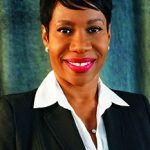 Monique Sheffield has been a District 4 resident for more than 20 years. She currently serves on the Lindley Sixth Grade Academy’s School Counseling Advisory Committee; is facilitator for Commissioner Lisa Cupid’s annual Cobb County HOA Bootcamp; and is the past-president of two HOA communities. Serving on the HOA boards was rooted in Sheffield’s desire to solve problems within her community. It is her belief that serving as HOA president builds compassion and tolerance for the unique situation of others. She also volunteers with Keep Cobb Beautiful and other civic organizations for litter pickup and beautifying her community. She is a graduate of Cobb 101:Citizens Government Academy and Cobb County’s Public Safety Academy. She served on the Board of Zoning Appeals from 2017-2019. Her time on that board provided a platform for Sheffield to connect with residents and business owners in the community on zoning appeals matters that are important to them. It allowed her to serve as a mediator to make decisions on zoning variance cases that were fair and equitable for all involved parties.

She currently resides in Mableton with her husband, Eric. She is co-owner of Sheffield Realty Group, Inc., a boutique real estate brokerage located in Mableton, is a certified instructor with the Georgia Real Estate Commission, and has a bachelor’s in criminal justice.