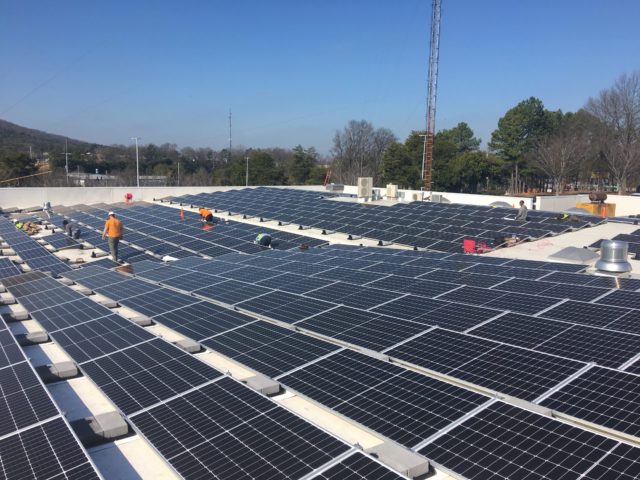 As sister companies, Cobb EMC and Gas South share a lot in common. Both are Georgia-based energy providers serving hundreds of thousands of customers in metro Atlanta and beyond. Both also are working to stay on the cutting edge of energy, keeping up with the latest technology and trends in an ever-changing world.

With that forward-looking perspective and in partnership with Kennesaw-based Creative Solar USA and Northern Reliability, the companies are building a solar energy and battery storage facility on Cobb EMC property in Cobb County. Once complete, the renewable energy project will enable Cobb EMC to operate its headquarters during certain hours using 100-percent renewable energy, while diverting shared solar energy back to the grid.

“This project is an innovative partnership that helps the cooperative learn how to better support our members who have interest in solar and battery storage and provide peak reduction savings that are passed on to our members. This means a decreased amount of electricity supplied from the grid,” says Cobb EMC Vice President of Power Supply and Planning Tim Jarrell. “Gas South’s partnership allowed the opportunity for the project to qualify for the federal tax credit available for solar and battery projects, reducing the total cost of the project and Gas South’s taxable income. Through a market power purchase agreement, Gas South and Cobb EMC both demonstrate their support of renewable energy and a reduced carbon footprint.”

The project broke ground on February 13, as leaders from Cobb EMC, Gas South, the Cobb Chamber of Commerce, Creative Solar USA, and Northern Reliability all were on hand for the groundbreaking ceremony.

“We’re committed to affordable, renewable energy and redefining what it means to be an energy expert,” Peter Heintzelman, Cobb EMC president and CEO, said in a press release touting the event. “This project enables us to test the performance advantage and resiliency of solar panels and battery storage, which will benefit Cobb EMC members for decades to come. We’re proud to support sustainability efforts that make financial sense for all of our members.”

Gas South President and CEO Kevin Greiner echoed Heintzelman’s sentiment, saying, “Together, we’re committed to renewable energy that will pave the way for a more sustainable future for our communities. As a subsidiary of Cobb EMC, we are excited to work with our parent company on this innovative project.”

At full build-out, roughly 1.85 megawatts of solar and 1 megawatt (4 megawatt hours) of battery storage will be added to Cobb EMC’s campus near Highway 41, helping power its operations for years to come. Company officials say the project will provide enough power to supply about 200 homes for a full 12 months.

Founded in the 1930s, Cobb Electric Membership Corp., or Cobb EMC, is a non-profit electric utility serving customers not only in Cobb County, but in Cherokee, Paulding, Bartow, and Fulton counties as well. Initially serving just a few hundred clients, it now reaches more than 200,000 customers and is one of the nation’s largest EMCs.

Established in 2006, Gas South is a wholly owned subsidiary of Cobb EMC, serving residents, businesses, and governments not only in Georgia, but in Florida, North Carolina, and South Carolina as well. Boasting more than 300,000 customers, the company prides itself on offering simple and competitively priced rate plans along with excellent customer service, and has promised to give back 5 percent of its profits to assist children in need.

An expansion of the renewable energy project includes a series of “Smartflowers” on Highway 41, which will provide another 13,140 kWh of power and give the cooperative a high-visibility chance to showcase renewable energy to the public.

Three of the flowers are located along the highway, while the fourth is a mobile smartflower that stays on Cobb EMC’s campus, but is also available for select events to demonstrate the power of the sun. Essentially, Smartflowers follow the sun, opening in the mornings and closing in the evenings. Visitors are encouraged to stop by the “solar garden” to see the flower power in action.

Solar energy created by the project will be stored in batteries for use when needed. “Clean, renewable energy sources are an important part of a sustainable society, says Jarrell. “Renewable energy can displace our need for other sources of energy. Such renewable power resources, such as solar and wind, might not be produced during high usage periods, depending on weather conditions. Integrating a storage solution with the solar provides the opportunity to store renewable energy until required. This makes it an ideal sustainable energy project.”

Exactly when will the renewable energy be available? That depends on a host of factors. “There will be times that we will generate more from solar from the Smartflowers, rooftop solar, and car canopy than actually needed to meet demand,” says Jarrell. “As a result, there will be excess solar generation that will go to the grid. Regardless, when the solar energy is available, it will help reduce the power needed from the grid.”

Gas South and Cobb EMC are joint owners of the project, which aims to provide the EMC with both battery and solar energy for 10 years. Creative Solar USA developed the rooftop-mounted solar panels and energy storage units, which should be operable this spring. In pursuing the project, Cobb EMC becomes one of the nation’s first electric cooperatives to add battery storage and rooftop solar to its offerings.

“Cobb EMC’s energy portfolio, over the past few years, has seen a continual increase in renewable energy,” Jarrell says. “We will continue to look for viable economic renewable projects and we do expect to roll out some sustainability goals in the future.”

Creative Solar USA describes itself as a “turn-key” installer of solar panel systems for homes and businesses, offering roof-mounted, ground-mounted, and parking canopy-mounted panels. “The team at Creative Solar USA is proud to play a role in this important project, which will not only provide competitive renewable energy to the grid but serve as a learning tool for future projects,” said Russell Seifert, CEO of Creative Solar USA. “I founded this company to be a cutting-edge leader in our evolving energy market and this project is a standing example of our commitment to clean, economical electricity for our fellow Georgians.”

As its name implies, Northern Reliability is not based in Georgia. The Waterbury, Vermont-based engineering and technology firm designs, procures, installs, and supports stand-alone electric power and energy storage systems for utilities and governments, both inside the United States and internationally. Founded in the early 1970s, it now boasts more than 1,000 systems across the globe and on all seven continents.