SafePath’s Next Generation of Advocates

For Jinger Robins, it all started with an ad in a local newspaper in 1995. For Rachael Brunelle, it began with a golf cart ride in 2015. Call it fate or call it happenstance, but these two were brought together because they cherish the same thing — a community free of child abuse.

Robins is the CEO for SafePath Children’s Advocacy Center, which is dedicated to improving the lives of children who have been abused. The Center offers resources and a team of professionals whose mission is to reduce the trauma to children and their families by providing a comprehensive, professional, and child-friendly approach to the allegations of child abuse.

“One day in 1995, while reading the newspaper, I noticed a small ad looking for an executive director to develop a new advocacy center that would be located in Cobb County,” Robins recalls. “I was intrigued. I love and thrive in the development of new approaches to the challenges of dealing with the protection of children and creation of systems leading to healthy childhoods. I applied for, was offered, and accepted the position. The rest is history!”

Robins will celebrate 24 years with SafePath this April and 38 years in the fields of child advocacy, child development, child psychology, and organizational development of systems that protect and provide services to children. 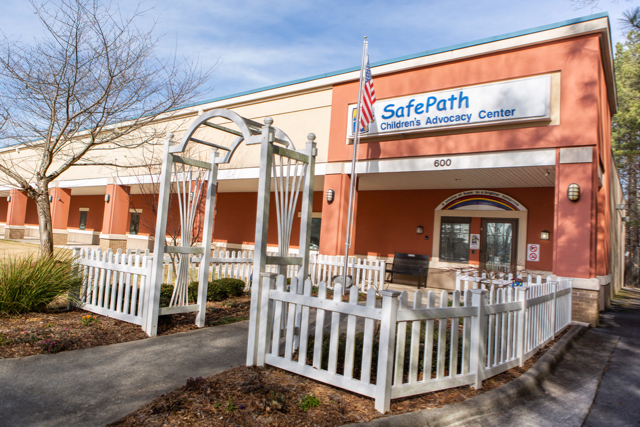 She met Brunelle four years ago while looking at an apartment for her daughter. Brunelle remembers chatting with Robins about SafePath and not long after, she and her husband, Robert, were sponsoring a table at the nonprofit’s annual Hearing Children’s Voices Gala.

That first year, they made a small donation in honor of Brunelle’s friend who needed SafePath services as a young child. Since then, the couple has hosted the gala one year and annually brings a group of 20 family members and friends who absolutely love the event. “My husband and I have a strong heart for kids who struggle, and especially kids who need SafePath’s services,” Brunelle says. “It does my heart good to drive by that building every day and know that … I’m an active member of my community. And, there’s no better way to be an active member than through SafePath.”

Robins says it is important for future generations like the Brunelle’s to support SafePath because child abuse is a complex problem that has existed throughout history. “The cost of the consequences of child abuse is in the trillions,” she adds. “The effects of children being abused impact all of us as a society. Our quality of life — now and in the future — is determined by our treatment of children.”

Brunelle adds, “For my generation, it’s really easy to think that the adults will do it when the reality is that we are the adults. It’s time for my generation to step up and serve the community.”

About the gala
This year’s Hearing Children’s Voices Gala will be held Saturday, April 27, at the Renaissance Atlanta Waverly Hotel & Convention Center. Chairs for the 2019 event are Jennifer and Jeff Brown, and this year’s theme is “SafePath Night Fever … Heating Up the Community’s Response to Child Protection.” Guests are encouraged to dress in their favorite 1970s attire, enjoy a delicious meal, participate in a silent and live auction, and dance the night away to a live band and DJ.

Robins says the annual gala, which is held during National Child Abuse and Neglect Prevention Month, is important to SafePath because it helps ensure the organization’s operational and sustainability costs and closes budget gaps. “We are very proud that of every dollar provided to SafePath, two percent goes to fund raising, eight percent goes to administration, and ninety percent goes directly to program services for the children and families we serve,” she adds.

When the gala began 18 years ago, SafePath raised about $10,000, and approximately 150 people attended. This year’s goal is $315,000 and they anticipate more than 500 guests. Over the past 17 years, Robins says they’ve raised approximately $3.4 million for SafePath.

In order to get support each year for the gala, the community resources staff shares information about the event online at safepath.org, through social media, with printed invitations, and community outreach efforts.

“In addition, our Hearing Children’s Voices event chairs, Jennifer and Jeff Brown, along with our event committee members, continually work to bring in new sponsors, attendees, and commitments to ensure a successful event,” Robins says. “Last, but not least, our board members and their commitment to the children SafePath serves, helps make it a success.”

Board members are all volunteers who actively reach out to the community as they educate and communicate SafePath’s vision and mission to anyone who would like to volunteer or sponsor the gala.

“When we all come together and really listen to the abused child’s voice, we will hear the cries for help and also hear their whispers of thank you for being their voice when they could not speak,” Robins concludes. “I always like to share with our supporters — whether volunteers or sponsors — that the next smile you see on a child’s face may just be the one you helped SafePath put there.”

About SafePath Children’s Advocacy Center
Vision: A community free of child abuse.
Mission: To reduce the trauma to children and their families by offering a comprehensive, professional and child-friendly approach to allegations of child abuse.
Learn more: safepath.org

2019 Gala Chairs: Jennifer and Jeff Brown
Tickets are $175 and sponsorships are available by calling 770.801.3465, or visiting safepath.org/hearing-childrens-voices.